Yeah, no, not really. The most magical bit was back at RIZIN 31 when tonight’s headliner Miyuu Yamamoto showed up in a Hogwarts sweater and her opponent Rena looked like she’d had a few extra butterbeers. But, they both (magically?) ripped up and slimmed down in the intervening month and put on a main event with some drama. In short, Miyuu was kicking ass on the ground, and doing some damage to our beloved Rena’s face, when, after a brief scramble, Rena kneed Miyuu in the head and knocked her so silly she was no longer able to defend herself. TKO. 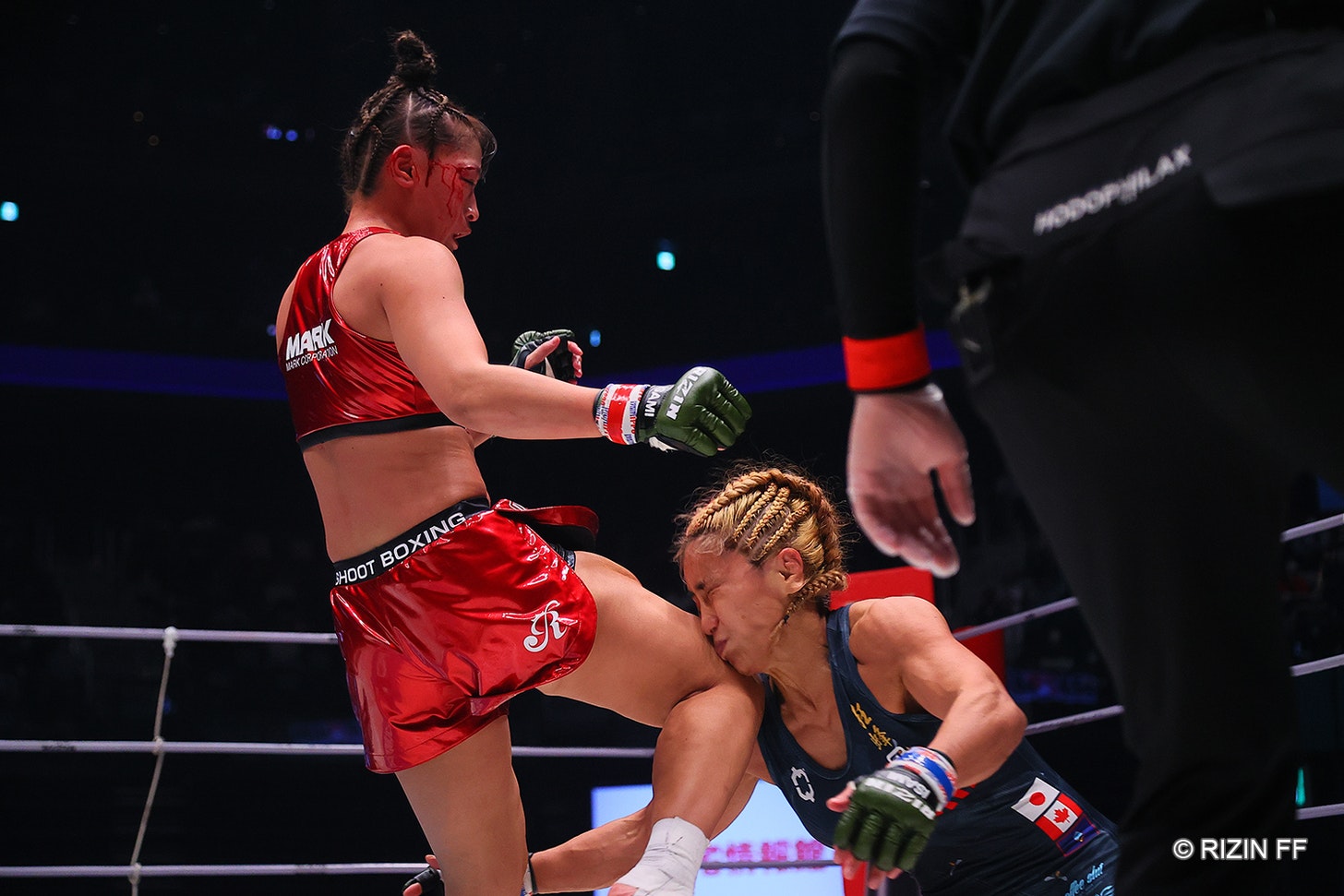 In the co-main, Kouzi was unable to knock out yet another MMA fighter in a kickboxing bout, so he punched him in the dick instead. But he finally got a win in RIZIN! Yahoo! 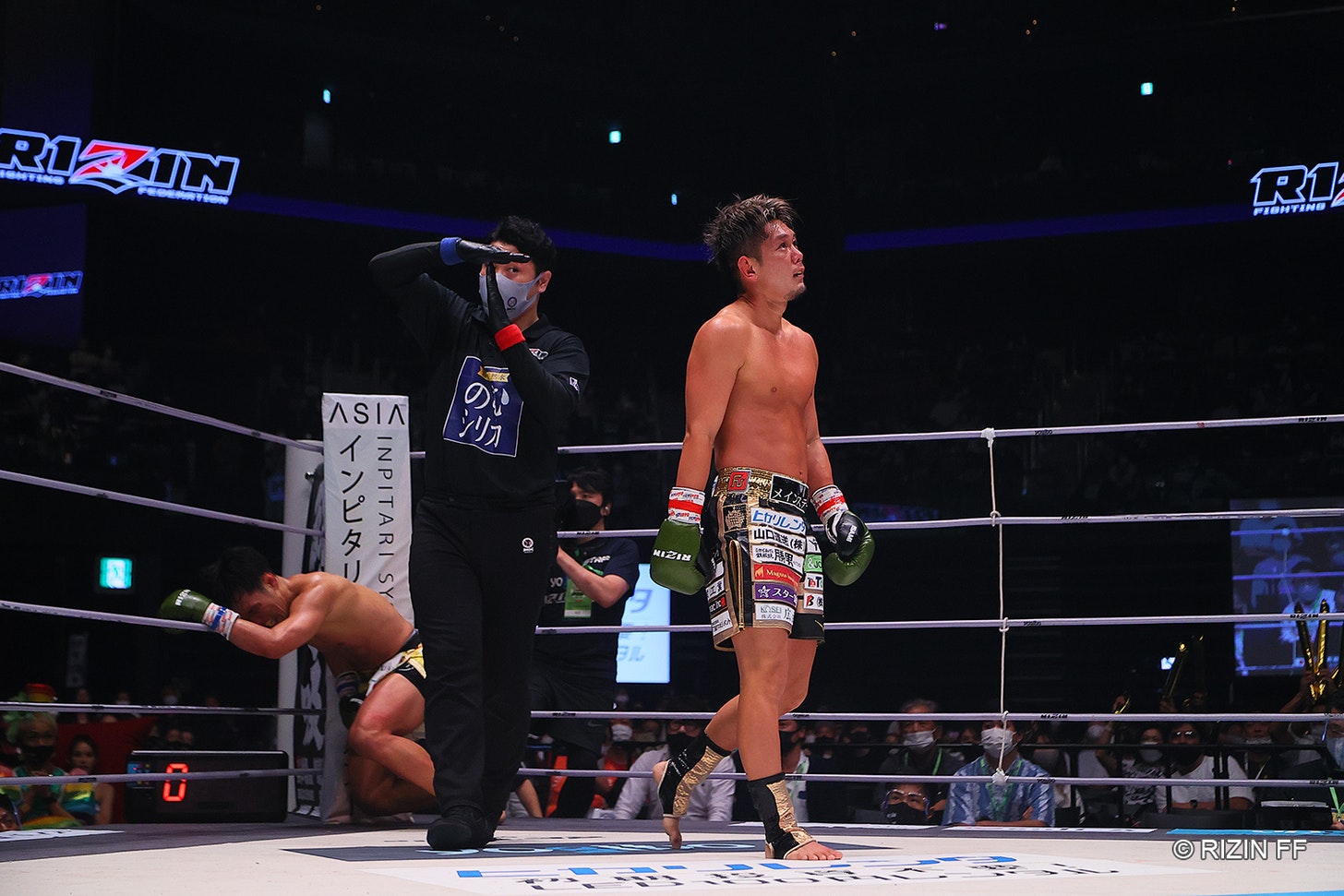 The Fight of the Night was a nasty scrap between Yoshiro Maeda and Mitsuhisa Sunabe. These two fought previously like a hundred years ago because, like many people on this card, they’re very old for professional MMA fighters. I credit it to the rejuvenating power of the Okinawan climate and diet. Despite their age, it was an active and scramble-y battle that turned when Maeda headbutted Sunabe and destroyed his nose. Before this, I had Sunabe winning, but then he lost. 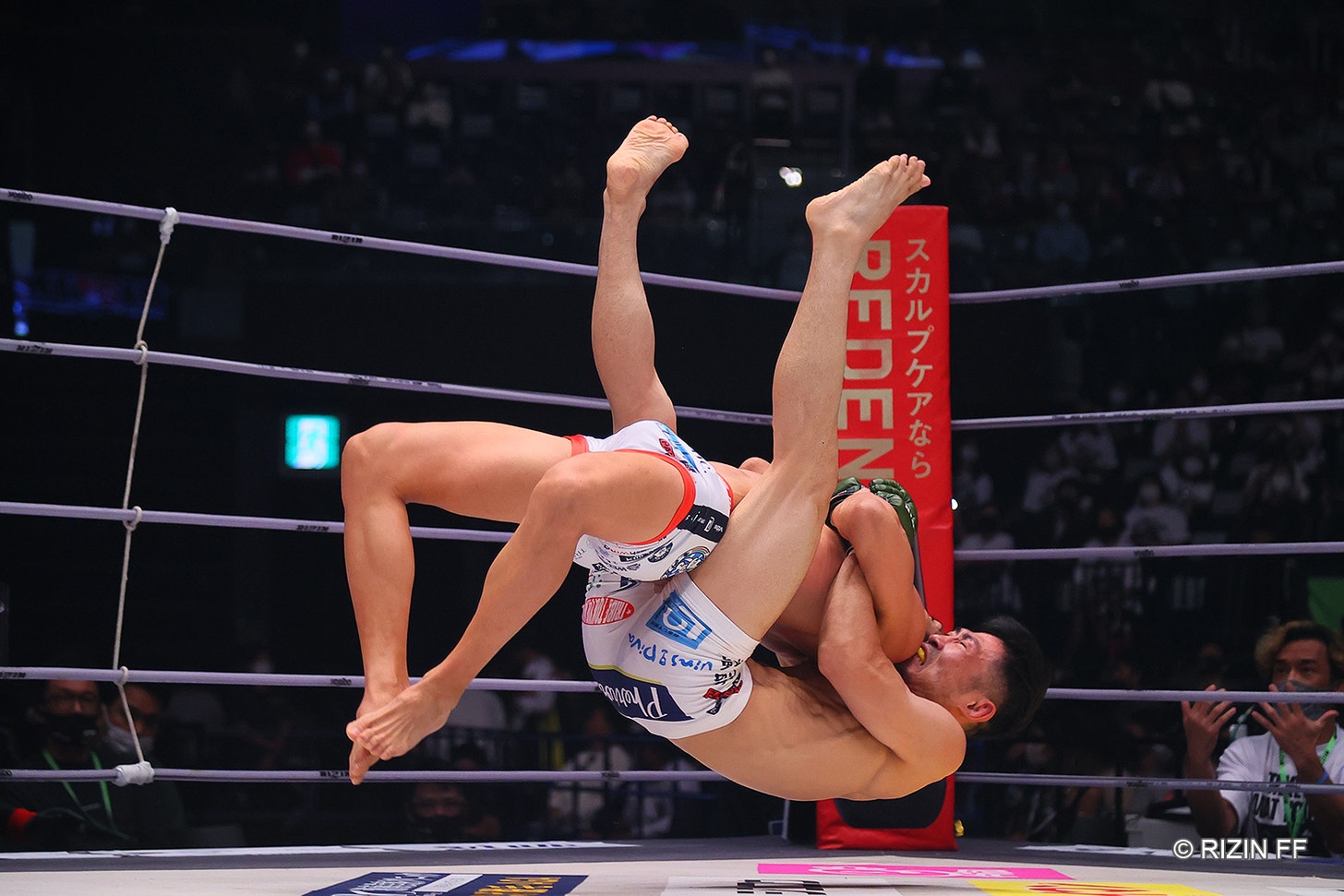 The freakshow heavyweight fight was both dull and bloody, but thank God they changed the rounds from five minutes to three minutes or it would have been even worse. The 55-year old won. No really. 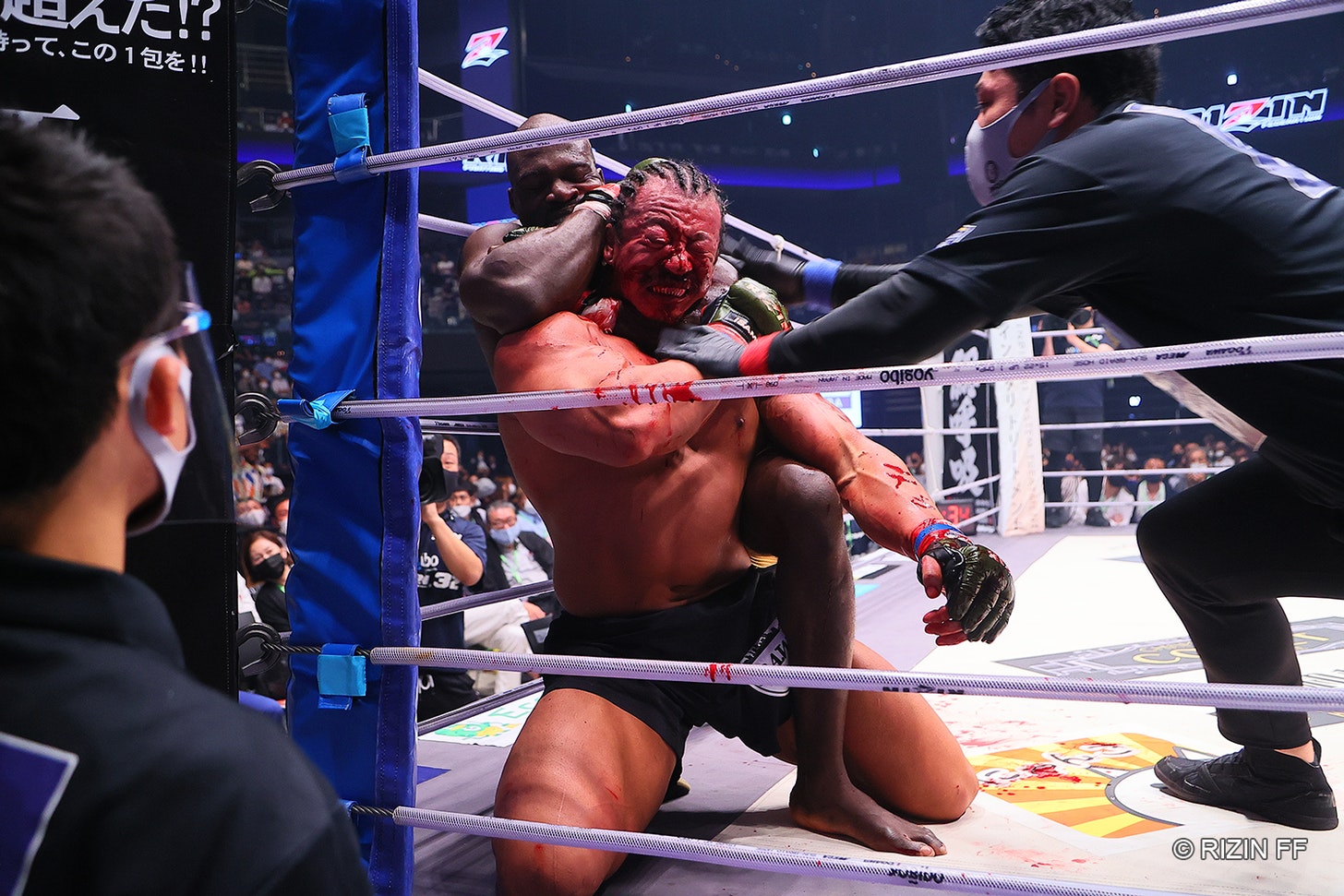 Further down the card, BeyNoah had a nice comeback win after an unfortunate loss in his debut at Tokyo Dome a few months ago. Juri Ohara had a big decisive victory against an overmatched Lethwei fighter. I’ve been kind of surprised they haven’t brought Ohara back to RIZIN since he beat Yachi Yuskuke (I guess because he beat the former RIZIN faceman) but here he was with a big performance and calling for a spot on New Year’s Eve. Give it to the man! He’s certainly got a more impressive RIZIN resume than Kouzi. 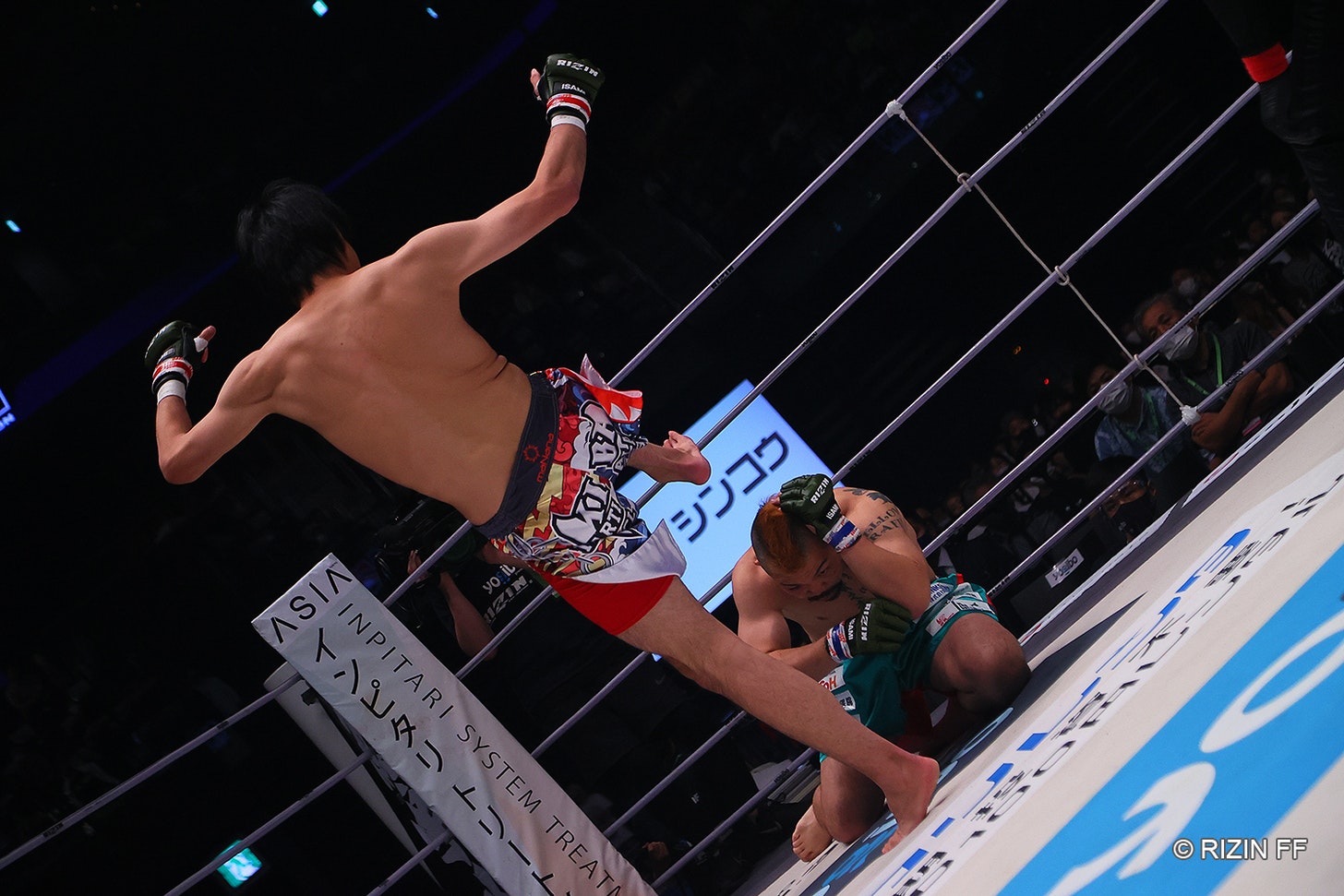 Other bouts included two ojisans (middle-aged dudes), Haruo Ochi and Tatsuya So, a literal ice cream man, battling it out in an entertaining scrap that was fairly well matched compared to some of these fights. I’m looking at you Lopez Satsuma. In an absolute travesty of matchmaking, a 50-year old man who moved slower than Nick Diaz in molasses got very nearly murdered by Sho Sekihara. Bad shit. Also weird, but not ugly, was active U.S. military man Tanner Lourenco defeating gi-wearing Shinya Kumazawa in Lourenco’s MMA debut. The fight was notable as it’s the first time in RIZIN history a fighter has worn a gi, though it has always been allowed. As the fight showed, it’s probably the last time too.

Well that’s it for RIZIN 32. Excuse the brevity, but I honestly wasn’t planning to write anything at all. Next up for RIZIN is the inaugural RIZIN Trigger next weekend. It’s a mammoth 14-fight card of a similar pedigree to this one, but at least it’s got fewer senior citizens. Curiously, the fights are in a cage. We’ll see how it goes. Hopefully you picked up the discount bundle for both events on Live Now.

Check out the recent Fight Pizza Movie Night, New York Ninja if you missed it. Also give a follow to the new Twitter if you fancy. ✌️