RIZIN Landmark 1 consisted of just four fights and took place on October 2nd in Tokyo, Japan. The following is a diary of the fights, but there's much more detail (and pictures) about the event and RIZIN on Fight Pizza. 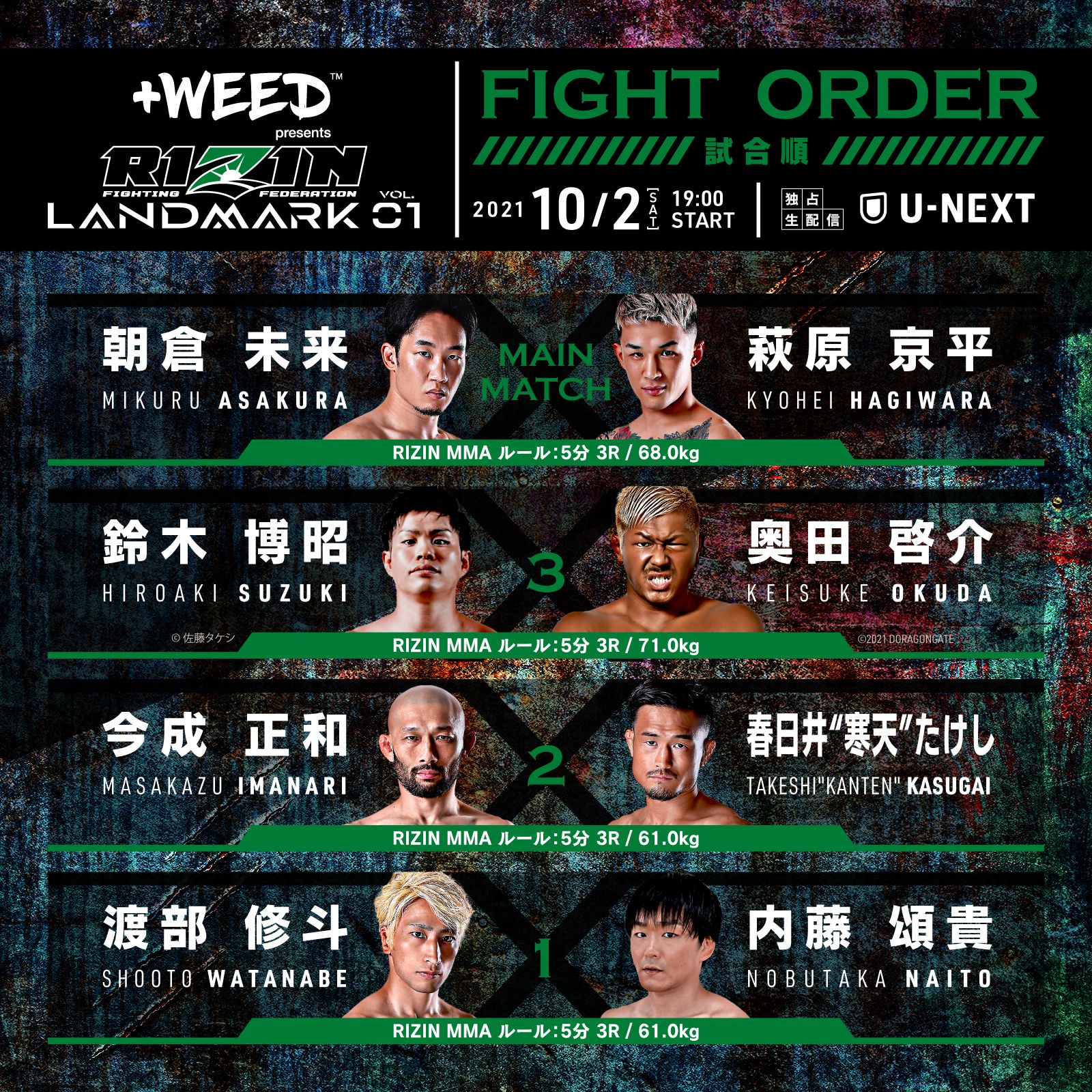 Shooto’s a good fighter who had the misfortune of getting an amped Kai Asakura in the first round of the Bantamweight Grand Prix. I don’t know much about his opponent Naito other than he was a short-notice replacement for the original opponent who got the COVID and Naito ironically has lots of fights in Shooto.

Naito walks out to some ska and looks scared or insane. Ougikubo’s in his corner. Shooto looks calm with his girlfriend in the corner. Naito’s Shooto experience does not help him with Shooto. He is out within two minutes by a d’arce. It was very obvious this would happen as soon as Naito started the fight desperate to stay away from Shooto and Shooto got the takedown. They really should have matched Shooto up with Imanari, who fights next.

I know this is blasphemy to say but, aside from the Sade, Imanari’s recent fights just suck. Road to ONE 3 was like watching very timid paint dry. His match up with villainous madman #ScaryKenta Takizawa at RIZIN 29 was just stupid. Let’s hope Takeshi Kasugai has something to offer more than slowly outpointing Imanari from a distance, or, God forbid, Imanari changes his tactics slightly, knowing he’s going to lose yet another dull as fuck fight. Ask yourself, What Would Shinya Aoki Do?

Kasugai’s nickname "Kanten" means like a type of jelly for making sweets so let’s see if he can blob around Imanari’s limb manipulation. I like Kasugai’s walkout to 50s sounding pop carrying a bail of rice or some shit (It’s actually the same thing as his nickname, like the raw material or something?). Imanari with the trademark Sade and a serious mien.

Kasugai is willing to strike early which is a nice change of pace for an Imanari opponent. I really think someone can just shut the old man’s lights out fairly quickly if they pursue it (and don’t get a limb ripped off).

Kasugai got a limb ripped off. In this case an arm, after following Imanari to the ground and attempting some decent ground and pound. Another first round finish. Back to the drawing board on how to beat this dude in a somewhat interesting fight.

I don’t really know what to make of this fight but that’s probably because I have no real knowledge of or affinity for pro wrestling. (I guess I’ve probably seen Suzuki fight in ONE at some point but I don’t remember.) Clearly it’s a popular fight as these two faced off in the ring at RIZIN 30 and it’s the co-main (such as one exists on a four fight card), but it’s out of my purview so I’ll just sit back and watch.

The pro wrestler gets kicked in the face staring at the striker’s legs in preparation for a takedown. Shortly thereafter he gets kneed in the head. Fight’s done. Totally overmatched dude loses quickly in the first round. Surpris

Here ‘tis. The one we’ve been waiting for. Probably the biggest star currently in RIZIN against the brash, wild, pot-smokin’ youngun’. If you paid nigh 35 bucks for this card, this is what you were paying for. I’m on the record thinking Hagiwara is gonna get his ass kicked and I’m sticking with that as a strong possibility. Mikuru walks out looking loose and like he’s ready to have fun fucking this dude up. Kai in the corner of course. Kyohei does not look intimidated however, which is sort of his beauty: his irrational confidence.

Mikuru opens the fight cautiously and they're trading kicks then he weirdly goes for a takedown which he gets. Kyohei reverses and has Mikuru in some danger from stomps then a guillotine. Mikuru with another takedown and continues to control on the ground but doesn’t do much to see out the round.

Round two begins much the same as round one and carries on in the same fashion until Mikuru takes Kyohei’s back and is just wearing on him rather than going for subs. I did not expect these tactics from Mikuru at all, but here we are getting ready for round three and Mikuru is easily winning the point battle.

Mikuru seems a bit more open with his strikes to start the third but then goes for the takedown. Midway through the round he lands some nasty grounded knees and hammerfists but can’t finish. He sees out the fight for an easy unanimous victory. We’re talking 30-26 if it was on points. Not what I expected at all, but clearly a smart and effective game plan. The main event goes the full fifteen which is like twice as long as the previous three fights. It was a real big-brothering from Mikuru. Impressive if not spectacular.