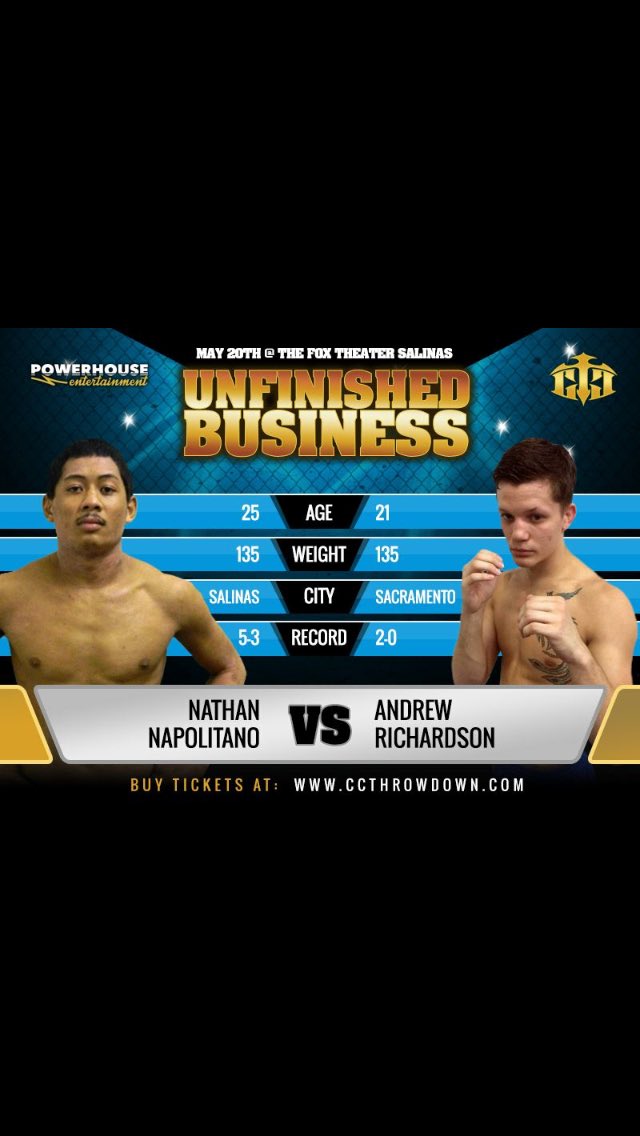 So, things didn't go as planned.

Nevertheless, I'm aware of my obligations to my most ardent supporters, the MMAmania faithful. I've also written a recap of my fights as fairly as I can remember, and I see no way to excuse myself out of doing it now. Once I have the official video from the promotion -- ASSUMING this one comes through on that end -- I will repost this to the front page with any updated thoughts.

Until then, though, I wanted to fill you guys in.

I accepted the above fight on three week's notice. A couple weeks previous, I had been told that I was booked on a card in Sacramento at the beginning of June. I was definitely excited to compete in my new hometown, but within a week that entire event was scrapped, so I scrambled for a new match up.

Somehow, I ended up three hours away in Salinas, living up to my "Roaddog" moniker.

About two days into my abbreviated fight camp, I whacked my ankle on top Team Alpha Male prospect Benito Lopez's-- check out his flying knee HERE! -- bony ass knee drilling in wrestling practice. I walked away with an egg on my ankle, but that quickly sunk down to some general swelling all over the foot. I went to a boxing class that night with some of my fellow up-and-comers and felt pretty decent. Definitely sore, but overall I moved well and felt fast.

By the time I got home and took my shoes off, I had trouble walking. Annoyed, I had to spend five days laying around and doing nothing -- I read all 1100 pages of Stephen King's IT in that time period -- before starting up against at the beginning of the next week, 12 days out.

Not ideal, but also hopefully not seen as an excuse. The only real effect that missing those sessions could have had is a hit on conditioning, but fatigue is not the reason I lost.

At any rate, training went pretty smoothly outside of my ankle, which healed well if slowly. I began dieting at the start of my three week camp, beginning at about 145 lbs. I got down just under 140 heading into fight week, which is when I actually started counting calories. All things considered, it was probably my easiest "cut" to Bantamweight yet, as I woke up at 135 lbs. on fight day, eating a small snack before the long drive down.

Weigh ins were reasonably smooth as well. They took a bit longer than necessary, but that's the case just about every time. My opponent and I made weight without issue, and then I left with my team mate Josiah McHale and girlfriend to a BJ's, where we killed some pasta. Afterward, we still had a few hours before we had to arrive at the venue, so we went to Josiah's comped hotel room nearby and watched about two hours of Good Will Hunting.

Still kinda bummed we had to leave before it ended.

At 5pm, we arrived at the "fighter locker rooms," a wine bar opposite the street from the arena with no dividers between the "locker rooms," which was at a theater. A real theater, one where plays or concerts regularly take place. It was actually a pretty nice venue, different from the usual warehouse, casino, or gymnasium.

Regardless, the fights didn't start for another two-and-a-half hours. The three of us continued to kill times by doing just about nothing, staring around the room and hoping for something interesting. A couple hours in, our cornerman arrived, Team Alpha Male boxing coach Joey Rodriguez and our undefeated training partner, my MMAmania video co-host, and all-around bad ass: Andrew "Bullnuts" "Bulldog" Coyne.

The time moved along at its usual mediocre peace. At some point during the day, a trio of fights were canceled, which moved Josiah to slot six and myself to fight eight. Just before the fights began, the California Amateur Martial Arts Organization (CAMO) officials announced that there would be an intermission directly following my fight, number eight. My group of assholes cheered together, happy to fight and get out as quickly as possible.

The fights themselves moved reasonably quickly. Josiah went out and did his thing, winning a unanimous decision and improving his record to 5-2 (two split decision losses) as an amateur. Hopefully, I can write more about this fight and include a video in the future, but I wasn't watching that bout.

Immediately when McHale returned, I went to work warming up for the fight. I drilled in the clinch with "Bulldog," worked fit-in takedowns, and sped off some punches with Coach Joey. I won't lie, I kind of hate warming up, so I wasn't that upset to get a quick sweat and abbreviated warm up before it was my time to walk.

A CAMO rep lead me across the street and into the theater. I watched as the winner of the seventh fight was revealed, and then the announcer dropped his bomb, filling us in that the intermission was about to begin! I was hustled back across the street, where I impatiently waited for about 20 minutes to walk again.

Emerging from the howl of Josh Homme's guitar in Queens of the Stone Age's "Smooth Sailing" -- a song so great my feelings toward it are unsoiled by this whole thing -- I walked down the middle of the hostile crowd and into the cage. I felt great in there, dancing around and ready to fight. My opponent followed shortly after, and I found out in the cage that he was ranked as number three in the state according to CAMO.

That excited me. I'm not in this sport to bullshit around and choke beginners; I've won (and definitely lost) rounds with UFC fighters in the gym. The California amateur scene is the best in the world. If you're the best fighter in California, there's a fair chance you're the very best in the world, and that all begins in small shows like this.

At any rate, I believe I fought well in the opening round. I kept my feet moving and feinting, expecting him to throw heavy kicks. He did just that, and I drew out and made him miss with a few low kicks. As I remember it, he cracked me with one solid overhand, but I returned to the favor with a couple combinations and counters while generally making him miss most of his shots.

Before long, we moved into the clinch. I tried to spin to his back but he defended by reversing me to my back. I scrambled to my feet and into a body lock immediately, where I landed a hard slam. He worked back up and hip tossed me in return, but I again scrambled into top position immediately. From there, he began throwing up all sorts of submissions, but nothing was close to a finish. I maintained top position until the end of the round and escaped the submissions, though he did land a few decent shots from his back.

I didn't land as many from the top, but I made mine count. I specifically remember a right hand after yanking out of a triangle, stacking his hips and landing the punch cleanly. It was competitive, but I believe that I won the opening round.

I don't recall being tired between rounds. I can remember the advise from both corner's; Joey told me to keep it standing, that I was out-working him there. "Bulldog" said to land more punches from top position to solidify the round further, as his activity from the bottom gave him a shot at winning the round.

I straight up don't remember the second round, but I did see a super shitty facebook video from the stands, and here's what I saw. My foe immediately ran after me with swarming hooks and spinning punches, but I kept my hands high and blocked most of it. Still, I stayed mostly on the defensive, looking to land a couple counters punches or clinch. He shook off the clinches -- he was definitely strong and had some level of Judo experience by my judgement -- and kept firing. Eventually, a couple punches landed clean, I wobbled, and one more had the ref call it. I didn't go out, but I went to my knee along the fence.

The whole second round probably lasted 20 seconds. Watching it back, the obvious answer was to move my feet. In my defense, however, the cage was small as shit. Seriously, it was like fighting in a bathroom, so that may have been difficult. More realistically, I wish I would've committed to a real double- or single-leg takedown instead of simple clinch attempts. Nearly three years at Team Alpha Male means I probably would've finished the shot, or at the very least forced a long grappling exchange and snuffed out that early round fire.

But I didn't do either of those things or land a counter punch meaningful enough to back him off, and so I lost.

Moving forward, I'm forced to take some time off and rest. The cage side doctor said that she doesn't believe I suffered a concussion, but frankly, nothing she did the entire day impressed me with her medical knowledge, and these things are iffy anyways. I'll stay in the gym and avoid hard contact for a bit, and hopefully I'll return to the cage in September after my Summer trip home to New Jersey is over.

Until then, I'm definitely disappointed in the result, but I'm not overly depressed. There was a time when I believe I would've been more crushed, but I'd like to think I'm a happier and more stable person now. MMA crazy, and getting caught in the second doesn't erase the improvements I've made or the success I've found with top fighters in the gym.

After the fight, my girlfriend and I slept for a few short hours at a hotel room in Monterrey before getting up early to drive to San Diego. At the time of writing, I sit in a wonderfully gorgeous location splitting my time between the beach and record stores, so it's difficult not to appreciate all the things that have gone well for me. Besides, a mopey write up would be terribly boring.

My goals and aspirations have not changed following this loss, and I hope to learn more from it as I continue to think it over and (eventually) watch the real film.

Thank you all for the support.