Shane Carwin, the destroyer of worlds and heavyweight chins, is hinting at a possible return.

The 41-year-old heavyweight who held the UFC interim heavyweight title from March 27, 2010 until his defeat at the hands of Brock Lesnar on July 3, 2010, is making a possible return with a cryptic response on a Facebook comment.

For those wondering, I'm alive and well. Back on Twitter (@ShaneCarwin), The UG MixedMartialArts.com, & even reddit's r/MMA. Apparently now I also need an Instagram, a Snapchat, a Yik Yak, three 3 hands and four cellphones to really keep up with my fans. I'm not so sure about some of those, but I wanted to let you know I will be active here on Facebook for all of you so feel free to ask questions and keep up with what's new in 2016.

Then came this little exchange: 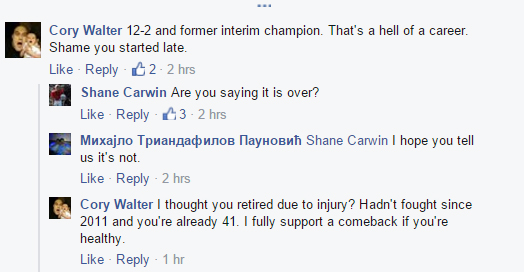 Carwin (12-2, 4-2 UFC) is currently on a two-fight skid; losing to then-UFC Champ Brock Lesnar in a title fight where he dominated the opening round, nearly finishing Lesnar with strikes. Lesnar rebounded in the second round, taking Carwin down and submitting him with an arm-triangle choke. 11 months later he would drop a decision to Junior dos Santos.

He came into that fight much lighter and with improved cardio but was unable to deal with the footwork and speed of Dos Santos which left him bloody and bruised. He was set to return against Roy Nelson in 2012 at The Ultimate Fighter (TUF) 16 Finale but withdrew due to knee injury.

He retired afterward and we all assumed returned to a quiet life of an engineer.

In 2016 it seems he might be thinking of a comeback at the age of 41. Personally, I support a comeback if he's healthy. His chin wasn't deteriorating and his worst and only real beating was at the hands of prime Junior dos Santos.

I think there are many winnable fights for him. His power and wrestling (as a former NCAA Division-II Champion in 1999) he's a scary opponent for many UFC heavyweights. I would like to see him fight Jared Rosholt in his return. Who would you like to see him return against? Someone in the Top 15 or an un-ranked fighter to throw him a "softball?"