They said it would make the sport more legit. They said it would bring more money to the athletics. Thus far, the notorious Reebok debacle has brought nothing but shame and humility. First, the fighters argued strongly against it and some even retired in protest. As ugly as the official uniforms are, Reebok’s performance is far worse.

Since the unveiling of the apparel itself, fans complained about the generic look. The fighters were also left scarred, as money was lost, due to the inability to remain sponsored. With the average of $5,000 a fight, most athletes took a significant hit and were forced to file applications for Chip & Dales. Have no fear, because matters will only get worse from here on out. 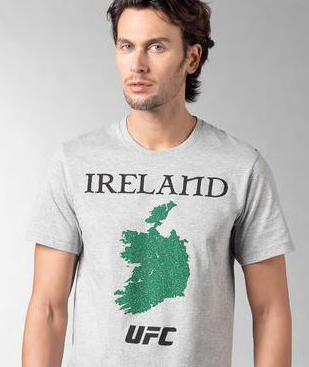 Just the other day, Reebok devised a scheme to win over their Irish fan base. Unfortunately their punch drunk design team wound up offending everyone. The controversial t-shirt nearly sparked a revolutionary war between Ireland and the United Kingdom. Of course, no one suffered more than the t-shirt model, Brad. Well, we will call him Brad anyway, just look at the agony in Brad’s poor face.

Of course, it does not end here either. Remember the promise of the awesome fighter jerseys, which could be yours for just $80 a pop? Previously it was reported only the kits of 8 fighters were available, but now we are down to 7 and then there were 6…… and then there were none.

If you are not a fan of beyond hyped-up fighters, you likely won’t have a dog in the fight. Do not worry though, because there are 4 for Conor McGregor and 2 for Ronda Rousey. This is great considering that these are the only two fighters that UFC talks about any more anyway.

In all seriousness, who would pay $80 for one of these horrendous shirts anyway? That is almost the price of 2 pay-per-views or like 8 months of fight pass. How much did it cost for 10 year old Juan to stich it up anyway?