These two hate each other's guts. And that makes for a great fight!

See the full UFC 178 fight card and line up here.

Leading the charge were UFC light heavyweight champion Jon Jones and undefeated division number one contender Daniel Cormier (see their insane staredown brawl here), but hot on their tail was the 145-pound showdown that has everyone talking.

I'm referring, of course, to Conor McGregor vs. Dustin Poirier.

After "The Notorious" featherweight accused "The Diamond" of having a head shaped like a wrinkly vegetable, Poirier asked the promotion for permission to expose the trash-talking Irishman. Well, McGregor held up his end of the bargain by thrashing Diego Brandao, and now we have ourselves a fight. 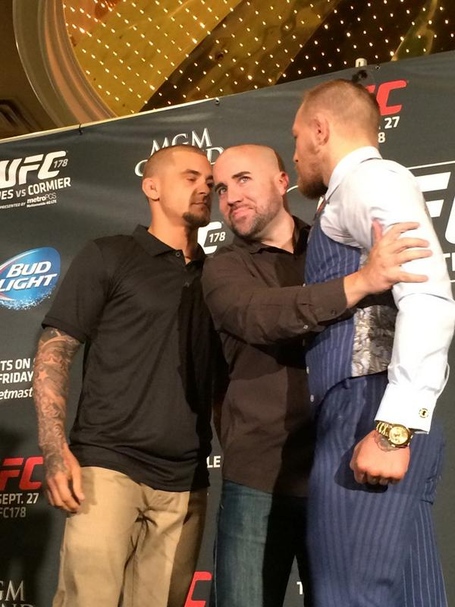 A win for McGregor will likely send him soaring into the top 10 of his division, since Poirier is currently ranked at No. 5 (see the entire top 10 here). A loss -- particularly a finish -- would be catastrophic, considering the amount of hype coming out of UFC Fight Night 46.

For more on their upcoming featherweight showdown click here.