Some of the friends, family, and training partners nearby immediately after my fight! - Andrew Richardson

Editor's note: This is my title because Richardson's humble "I won" headline does not do any justice to our enthusiasm for his big victory this weekend.

On Saturday morning (Aug. 9, 2014), my dad and I begin the 20 minute drive to Harrah's Casino in Chester for the weigh ins. A couple weeks prior, the promoter informed my camp that my opponent was switched, and the fight was now at 130 pounds rather than flyweight.

Frankly, I'm so accustomed to wrestling up two or three weight classes in jiu-jitsu that I wasn't really bothered by it. I just had to change my diet a bit.

At the casino, I met my main boxing coach, Andrew Peurifoy -- boxing fans would do well to remember that name in the coming years -- and his friend/boxer/one of my corner men Titus in the ballroom that would later hold the fights.

Continuing the tradition of my grappling tournaments, I was predictably the most baby-faced one there. Someone even called the promoter to ask if I was old enough to fight when they saw this advertisement.

After sitting around for about 45 minutes to an hour, I weighed in at about 129, posed for pictures, then went off and did the physical.

Between the weigh in and the fight, I laid in my room watching The Office reruns on Netflix and eating some food (egg whites, chicken salad, bananas). This was the worst part of the day, as I was at my most nervous/anxious while just waiting.

Once the work has been done and everything is in place, you just want to go compete.

Eventually, my dad and I went back to the casino around 5:30. After leaving him, I went backstage with AP, Titus, and my jiu-jitsu coach and third-degree black belt, John Hassett. Once I was in the back and chilling with them, a huge amount of the nervousness went away.

Plus, it's generally impossible to keep a straight face around Hassett. 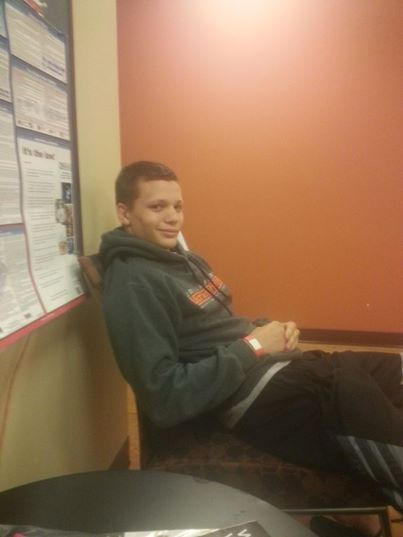 Before long, it was time to wrap my hands. Hassett wrapped them up, and he likes to wrap fairly thin so that you can fully use your hands. Some of the looks I got from other fighters in the locker room was pretty funny, but the best was the commission rep who had to approve the wraps.

I'm paraphrasing, but he said something along the lines of "I can normally tell who wins the fight from the locker room. Boxers that wrap their hands really think are insecure. It's like they're trying to build a weapon made of tape." After my fight, I saw him again and he laughed, shook his head, and said "I was a little worried about that one." 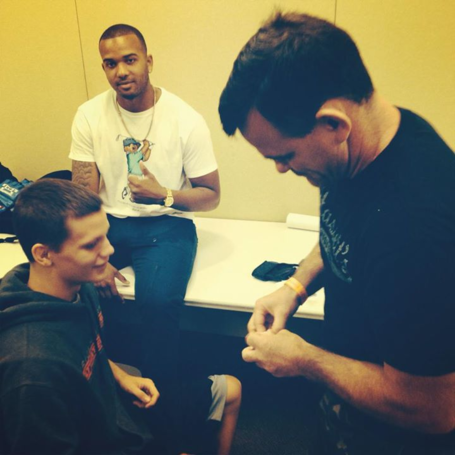 About to get wrapped

I was the fifth fight on the card, and I swear the fights ahead of mine possessed the longest two minute rounds in existence. Once the third fight came around, AP had me hit pads (his hands), shadow box, and lightly bounce around until it was time for my fight.

Then, my name was called, and I bounced out of the locker room and into the hallway. Once I got to the entrance to the area where the cage was, I went pretty tunnel vision. Per AP's instructions, I didn't look into the crowd as I walked the platform towards the cage. I didn't even hear my walkout music -- Protect Ya Neck by Wu-Tang Clan -- and had to ask people afterwards if it was played.

Once I hugged my corner and got some Vaseline rubbed on my face, I stepped into the cage. I had intended to stomp in like Frankie Edgar, but I completely forgot. The dull roar of the casino will do that to you.

Now in the cage, I continued bouncing around near my corner while my opponent walked in. 21 years old, maybe an inch shorter but thicker muscles, and seemingly calm. Prior to the bout, he had avoided meeting my eye whenever we crossed paths.

Now in the cage, he stared me dead in the face.

My bounce stopped, and I paced the distance of my corner back and forth while glaring back. After about 15 seconds, AP yelled at me, telling me to get back into my rhythm and stop playing his games.

The announcer speaks, the referee touches our gloves, and suddenly the fight has begun. When the bell rang, I muttered to myself, "Guess I'm really here, huh." Then, I stepped forward and was ready to go.

Here's the video below. It's my sister's iPhone video from the stands filled with loud noises and screaming, so I'd recommend dropping the volume. Once I get the fight video from XFE, I'll post that one, as it can be pretty tough to see what's going on at times in this one.

While I didn't have a specific game plan for this fight, I did have some general ideas. I wanted to get into my boxing rhythm quickly and move to my left, land quick, sharp shots to let him know he's in for a fight, and use my legs if he charged aggressively with wild punches. From there, wait until he calms down to start boxing and countering once again.

Outside of that, flow with the go.

Well, it went fairly close to that. Immediately, I landed a fast and hard jab right into his cheek bone. He stepped back, blinked once or twice, then decided to attack. I expected this reaction, and was well out of range of his punches. However, he did not settle back down afterwards and continued pushing forward and swinging.

During my movement, I think I landed a couple more jabs or a left hook, but it's honestly a bit of a blur. He did end one of his combinations with a side kick, which was more surprising than effective. I tried to kick him back but was short.

Then, he continued to swing, but I was out of range of his looping shots. Still, I felt that enough was enough. I feinted with a punch, changed levels a bit, and entered into the clinch. During this exchange, he landed his sole punch -- I'm fairly sure -- of the fight, a glancing right hook.

With a deep underhook, I began moving towards his back. He started switching his grip into a head lock or Judo throw grip, so I switched to a seat belt grip and took his back standing. He jumped, spun, and slammed me a bit, but it would be shameful for me to get shaken off back mount after all the complaining I've done on here about professionals just falling off easily.

I usually don't do the body triangle, but my opponent was fairly strong and really trying to move, so I switched to the body triangle once on the mat. Then, I wrapped one of my arms around his chin and kept the pressure, trying to inch under his chin. Every few seconds, I'd try to yank his mouth/raise his nose up with my free hand. 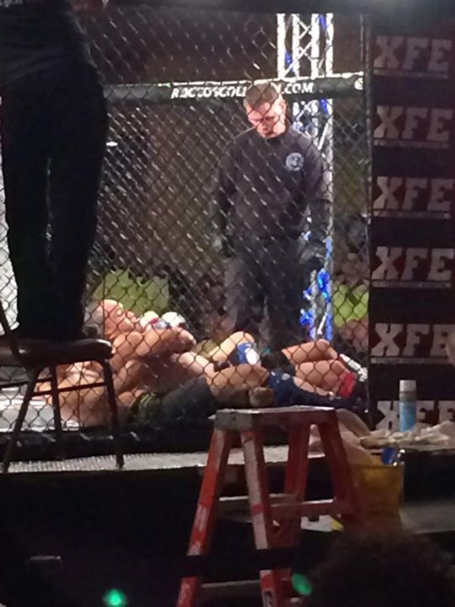 After a few seconds, he tried to roll away, which allowed me to flatten him out. From there, I landed a few punches to loosen him up while still squeezing in the choke. I could feel that my choking arm was halfway in, so I did what I call the D'arce finish to the rear-naked choke. The hand of my choking arm reaches out and grabs my tricep, allowing me to really use the non-choking arm to push his head into the choke.

As the name implies, this is the best way to finish the D'arce choke if your arms are deep enough. This technique forced my arm under his chin, and a few seconds later he tapped the mat. 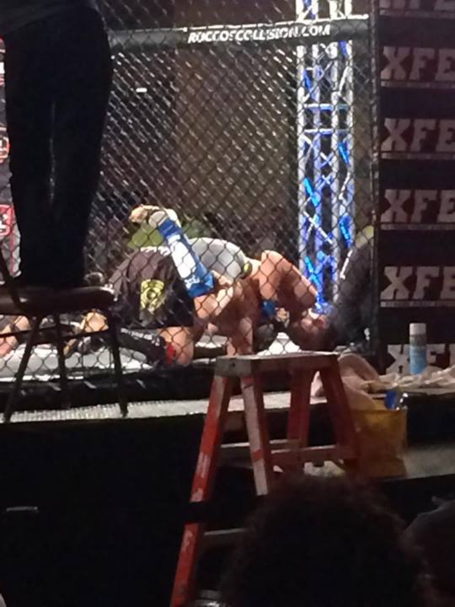 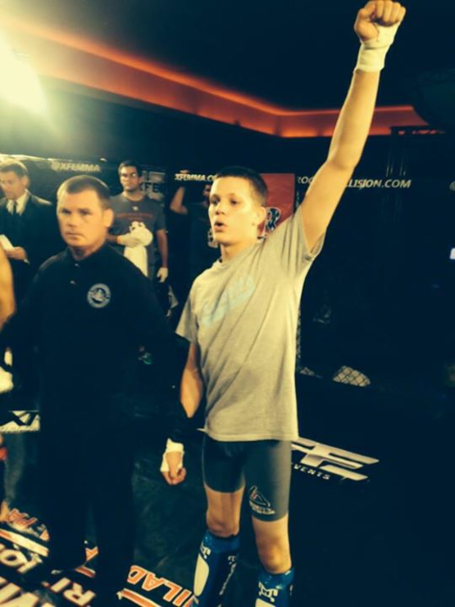 Eight weeks of hard work and dieting for 89 seconds of actual fighting.

I hugged my coaches, got my hand raised, and then took pictures with a lot of the people who were there to support me. Afterward, I talked to my opponent in the back, and he was really cool and respectful. That's always nice. 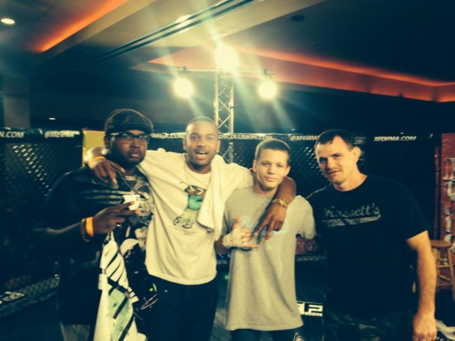