Could his brother Nate be far behind?

Former Ultimate Fighting Championship (UFC) welterweight number one contender, Nick Diaz, has emerged from self-imposed retirement to ink a new, three-fight contract extension with ZUFFA, one that is likely to put him back inside the Octagon in early 2015.

Which not coincidentally is right around the same time former middleweight champion Anderson Silva is expected to return, following a lengthy rehabilitation on his injured leg.

"I'd be interested in fighting [Anderson Silva] and anything that's going to do well. As far as Anderson Silva, I think that would be a great fight for people to see because he has my type of style. I think he has a little bit more of a kickboxing style. I think people have pointed that out to him, especially the way he lost his last couple fights. He's working on that now, and he has a lot of work to catch up on as far as his punching. Usually with my style, people have a hard time. You have to come forward if you're kicking and stuff. You got guys that are moving in and out, but I work hard. I don't jump in and out. You can wind up all indecisive out there." 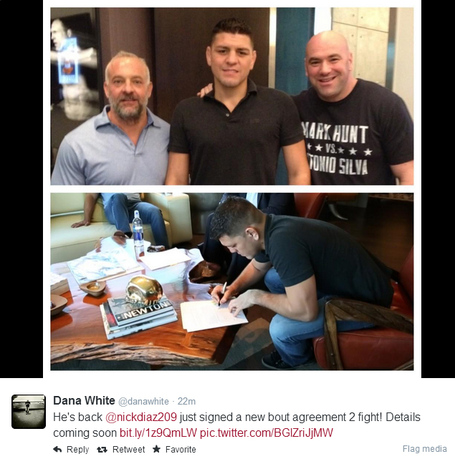 The former Strikeforce champ reiterated his desire to fight for the 170-pound title, or take fights that "lead to the title."

That may not be in the cards just yet.

Diaz, however, holds a win over current top contender Robbie Lawler, and has also been targeted by UFC on FOX 12 headliner Matt Brown (for this reason). Let's also remember his unfinished business with Carlos Condit. In short, the welterweight division -- even without this guy -- is as exciting as it has ever been.

Who do you, as a fan, want to see Diaz fight first?