It sure beats that "two fighters randomly screaming in opposite directions" look.

Share All sharing options for: Pic: UFC 176 artsy-fartsy poster for 'Aldo vs. Mendes 2' on Aug. 2 in Los Angeles

Ultimate Fighting Championship (UFC) featherweight kingpin Jose Aldo will give Chad Mendes a second crack at the 145-pound crown at the upcoming UFC 176 pay-per-view (PPV) event, which was recently made official for Aug. 2, 2014, inside the Staples Center in Los Angeles, California.

Today (June 6), the promotion released its poster for their upcoming showdown. 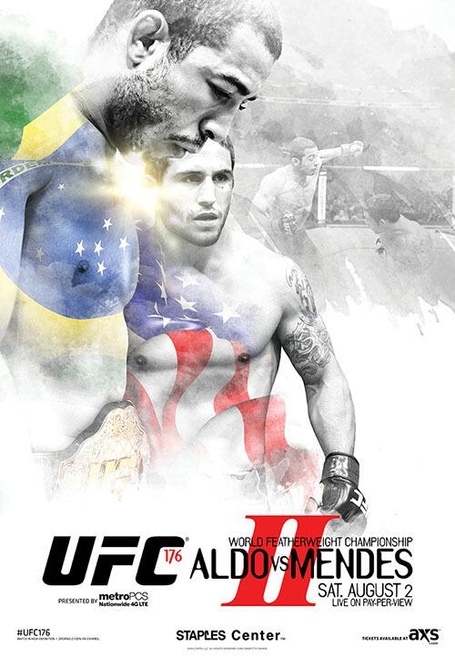 Aldo (21-1) hasn't lost in nearly nine years and already has six UFC title defenses to his credit. That includes a first-round knockout over Mendes (16-1) back at UFC 142 in Brazil (more on that fight here). Prior to eating a knee to the dome, "Money" looked to be on his way to securing a much-needed takedown.

Until a "Junior" fence grab kept him on his feet.

Would it have made a difference? No one can say for sure, but Mendes -- winner of five straight -- can lend us some insight this summer if and when he can get his arms around the Brazilian for a second time. To date, no contender has been able to overcome the champ's blend of speed and power.

Stay tuned to MMAmania.com for more additions to this recently-announced fight card as they become available.