"I’m a consultant and strategist for all sorts of different people and situations," Ryan Holiday tells me. At age 19, Holiday dropped out of college to become a media strategist for polarizing best-selling authors like Tucker Max and Robert Greene, and confidential PR aide to multi-platinum musical artists. At 21, he became the Director of Marketing for American Apparel where his advertising work was used as case studies by Twitter, YouTube and Google and written about in AdAge, the New York Times, Gawker and Fast Company.

Today, at 26, he just released his book, "The Obstacle Is The Way: The Timeless Art of Turning Trials Into Triumph," on the heels of his two best-selling books, "Trust Me I’m Lying: Confessions of A Media Manipulator" and "Growth Hacker Marketing: A Primer On The Future of PR, Marketing, And Advertising." Holiday is a partner in the creative marketing company StoryArk and continues to advise a variety of bestselling authors, with the likes of Timothy Ferris and Steven Pressfield now added to his client roster.

In his blog post titled "Savages" at ryanholiday.net, Holiday spoke of his experience training jiu jitsu: "There is savagery in jiu jitsu, which I do 4-5 days a week when I’m not traveling. There’s something savage about getting destroyed round after round and the fact that I keep coming back for more. I suppose I could get better faster by reading and studying but I think it’s better to do it this way. I go to get my ass kicked for a reason, and it doesn’t bother me that I do. I relish it a little bit. And mostly I learn from it."

We talked with this young game theory connoisseur to learn more about his relationship with the sport that personifies just that.

What attracted you to Brazillian Jiu Jitsu?

I had a bunch of friends who did it. Tucker Max was one of them. So I was always interested in it. I started jiu jitsu when I was in New Orleans finishing my first book. When I moved to New York I trained at Renzo Gracie Academy in Manhattan. Now I’m in Austin.

For me, it was this idea that I wanted to find something that challenged me that I’m bad at. Basically, jiu jitsu is a sport of managing your instincts and not giving into them. So I enjoyed and was stimulated by this thing that is just very unnatural to me. I was just attracted to the fact that I shouldn’t be attracted to it.

This idea of ‘the obstacle is the way’ is very big in jiu jitsu. Actually, the book trailer that we’re doing is two guys fighting no-gi jiu jitsu.

As I was thinking about what I wanted to feature in the book, I wanted to highlight this metaphor: If someone has you in side control or they have you in mount, everything you think you’re supposed to do instinctually is totally wrong. You’d be pushing as hard as you can with your hands, scrambling, breathing really heavily. You’d do all the things that you learn in jiu jitsu – step-by-step – not to do. That was a good metaphor for something that may happen to you in a negative business situation – a competitor is moving into your space, you’ve got a shitty boss that’s breathing down your neck. All the things you think you’re supposed to do when you’re facing an obstacle are exactly the worst things to do.

So for me, there was that image of being on your back and pinned to the mat, but understanding that if you can control your breathing, not make the situation any worse, and slowly create space, eventually you can work your way out of it. You don’t get submitted simply from being in side control or in mount. You have to make a mistake that then allows you to be choked out or armbarred. You have to make it worse. It’s not the worst thing in the world but it feels like it if you don’t know what you’re doing and you haven’t exposed yourself to it.

I’ve noticed a loosely affiliated group of people, including you, who are involved in some way with MMA. You have worked with Tucker Max, Tim Ferris, and Robert Greene. Max and Ferris train, and Ferris and Greene have both been guests on the Joe Rogan Experience podcast. There are a handful of other examples. What do you think about this?

Totally. There’s also Josh Waitzkin, Patrick Vlaskovits – a really great author and blogger who was also a judo champion, John Romaniello – wrestled in college, Jimmy Soni – Managing Editor of the Huffington Post and a good friend. I don’t put myself in their league. They influence me. Seeing Tucker and Tim do jiu jitsu made me attracted to it.

But I think it’s a couple things: I think every man gets to a point where they wonder if going to the gym and getting on the treadmill is really how they want to test and challenge themselves. Once you get over the actual discipline hurdle of committing to exercise, I think that’s when you look for a more substantive challenge that’s more humbling and exciting. I think MMA fits that. As some people explore self-awareness, they tend to explore what makes them healthy. If you look at the Paleo movement and the slow-carb stuff, you just start finding yourself bumping into the MMA world more and more. And some guys want to act on that curiosity. That’s what happened for me and I imagine that’s what happened for some of these other guys.

So people with strong minds are sometimes driven to explore development of strong bodies, exposing them to the world of combat sports?

Yeah. While training jiu jitsu, I thought about Theodore Roosevelt a lot. Theodore Roosevelt was a weak, frail kid. His father actually came to him and was like, "You’ve got a great mind but a very weak body, and a strong mind can’t do what it needs to do with a weak body." But Roosevelt didn’t just work out and lift dumbbells. It was about testing himself physically throughout his life: the idea of "The Strenuous Life." It’s about challenging yourself both mentally and physically. Jiu jitsu and MMA are the purest expressions of that idea. They’re as simple as it gets. It’s why Theodore Roosevelt is probably the smartest president we’ve ever had and he was literally practicing Japanese jiu jitsu at the White House. Every day he would do that. That is, I think, a very timeless connection with all sorts of men and women. It’s not a masculinity thing; I think women feel this increasingly in society too. It’s not like they were immune from the same evolutionary forces either.

What is your book "The Obstacle Is The Way" about?

"The Obstacle Is The Way" is based on the philosophy of Stoicism. It’s a philosophy I trace through history that allows people to solve real problems in their lives by overcoming obstacles and difficulties they would face. When you read Stoic philosophers like Epictetus, Seneca or Marcus Aurelius, you can see that they loved the metaphor of wrestling. They talked about themselves as wrestlers. Marcus Aurelius alluded to fencers versus boxers, and said, "The fencer has to grasp his weapon. The boxer only has to close his fist." The fencer has to pick up something that’s not them but you don’t need anything external with philosophy because it’s within you. The Stoics were intimately familiar with boxing. They were probably practicing Pankration – the sort-of Greco Roman form of MMA. So it was this common analogy and this thing they’d all experienced: this idea of a man in an arena faced with another man. Whoever wanted it more, whoever had the better strategy, whoever could endure pain and suffering in training better, would be the one who would come out the victor. That attitude and the framework that comes from that understanding is what the new book is about.

"The Obstacle Is The Way" is available to order on Amazon.com. 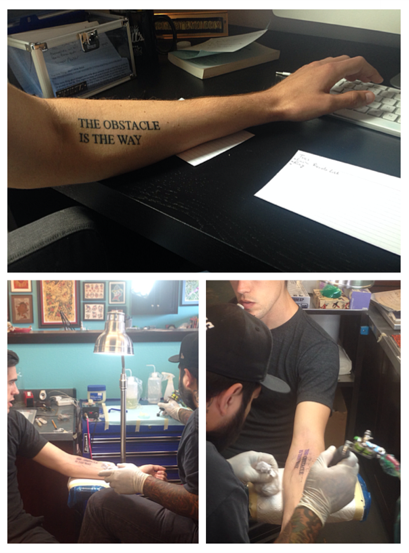