How many times have we as fight fans heard a fighter proclaimed to be the "GOAT" (Greatest of all time)? I'm sure it's an uncountable amount. There is one fighter who doesn't have the showmanship that some other fighters have who claim this title, he isn't his best hype man, and frankly his personality is fairly normal.

While he may lack the pizazz of say an Anderson Silva or the mic skills of a Chael Sonnen type, there is no denying Cain Velasquez's skills inside the Octagon. His aggressive style and unmatched endurance (in the Heavyweight division) has made him a very successful champion in the UFC and despite a minor set-back against title contender Junior Dos Santos in November of 2011 where he suffered his first defeat (via KO in the first) in many people's eyes Cain Velasquez is the greatest Heavyweight of all time. What makes him so? Let's a take a closer look at the man of few words that is the UFC Heavyweight Champion, Cain Velasquez. 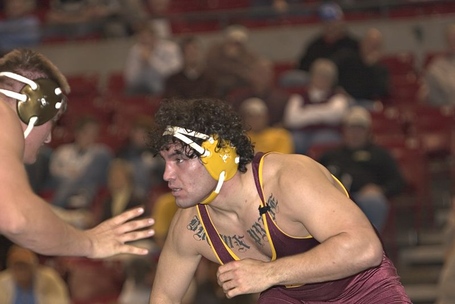 Cain was born in July of 1982 in Salinas, California to Efrain and Isabel Velasquez. Efrain was an illegal immigrant who fled from Mexico to seek a better life in the United States, there he met Cain's mother and through marriage attained US-citizenship. They later relocated to Yuma, Arizona where Cain was raised for much of his life.

Cain's athletic career, prior to MMA, was primarily dominated by wrestling. Cain graduated from Kofa High School with a very impressive record of 110-10 in his four years of wrestling, he also managed to win the 5A Arizona Wrestling Championship twice during his HS years.

After high school Cain attended Iowa Central Community College he wrestled one season and won the NJCAA Nation Heavyweight Championship. He then transferred to Arizona State University and wrestled for the Sun Devils for 3 seasons where he compiled a record of 86-17 placing 5th in the country (2005) and then 4th (2006). 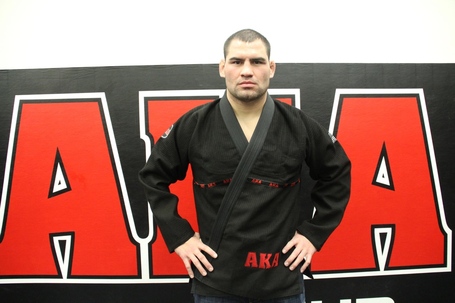 Soon after finishing up at ASU, Cain enrolled at the American Kickboxing Academy in San Jose, California. He then later in October of 2006 made his debut in MMA against Jesse Fujarczyk at Strikeforce: Tank vs Buentello, Cain won via TKO in the very first round (1:58). He followed that win up with another impressive victory this time over undefeated Jeremiah Constant in Bodogfights: St. Petersburg (December 16, 2006), Cain again won via TKO in the first round (4:00). 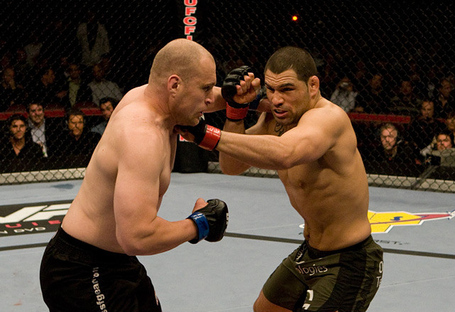 At this point he attracted the attention of UFC scouts. He made his UFC debut at UFC 83 (April 19, 2008) against Brad Morris and won yet again via TKO in the very first round (2:10). Cain's next UFC bout took place at UFC Fight Night: Silva vs Irvin (July 19, 2008) against Jake O'Brien and again Cain was victorious, TKO in the first round (2:02). Cain followed up that performance with a Knockout of the Night win over Denis Stojnic at UFC Fight Night: Lauzon vs Stephens (February 7, 2009) this time in the second round half way past the 2 minute mark. 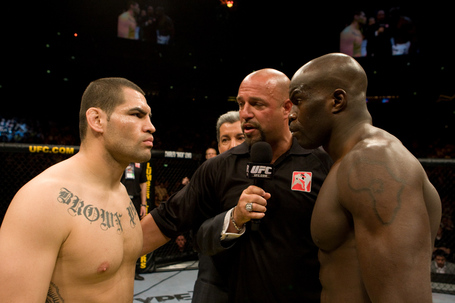 At this point the UFC decided it was time for Cain to take a step up in competition and they matched him up with dangerous heavyweight striker, Cheick Kongo at UFC 99 (June 13, 2009) in Cologne, Germany. This fight showed how well Cain could perform under pressure. The round started quickly and Kongo caught Cain with a two punch combo that abruptly persuaded Cain to shoot for a takedown. Once on the mat it was clear Cain had the advantage he threw heavier and heavier shots on the more experience Kongo seeking to ground and pound his way to a finish early on. Cain even attempted the first submission of his career, trying for a choke which gave Kongo the chance to spring back to his feet. Kongo's time on his feet was short lived, Cain quickly took him back down and Kongo was forced to fight from the mat for the rest of the round, only returning to his feet once the bell rang for the round to end.

The second started and Kongo again was scoring in the stand up, but Cain quickly clinched up with him and take him right back down to the mat. Cain threw a barrage of hammer punches and even managed to take his back. It wasn't until the post round highlights that it was pointed out Cain had been dropped with a right hand from Kongo while coming in for the clinch. The round ended much like the first.

The final round came, and much to everyone's surprise following a solid connection with his hands Kongo scored a takedown of his own but Cain being the more experienced wrestler swiftly took top position on Kongo. The round ended with the two scrambling until Kongo returned to his feet, landed a few knees from the clinch and some accurate punches before being quickly dumped to the mat again and used like a GnP dummy by Cain. Cain's 6th win in his MMA career came via a dominant Unanimous Decision win over Cheick Kongo. 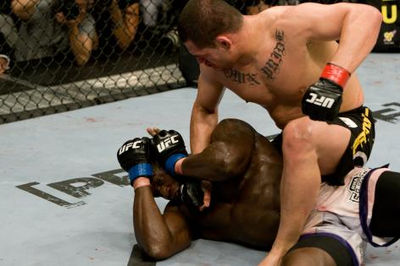 Before facing the biggest test of his career, Cain would face MMA Veteran Ben Rothwell at UFC 104 (October 24, 2009) in Los Angeles, California. Who he claimed a TKO victory over in the second round of their fight (0:58) a stoppage Rothwell protested arguing that he was returning to his feet and the ref had no business calling the fight. Cain did not show excitement at his victory but he walked away a winner regardless. 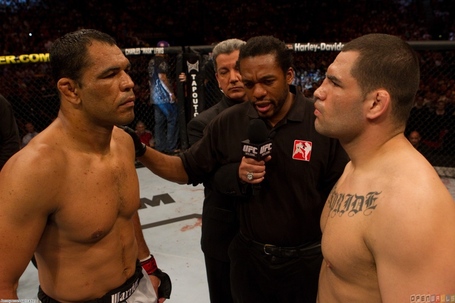 Cain's very next bout took place at UFC 110 (February 21, 2010) against MMA Legend and former UFC heavyweight and Pride heavyweight Champion, one of the greatest Heavyweights of all time, Antonio Rodrigo Minotauro Nogueira. Famed for his granite chin it came to many fans and fighters' surprised when Cain TKO'd the former champion in the very first round (2:20) will a blitz of kicks and punches he had not showcased inside the Octagon until this point, proving he was much more than just a wrestler. 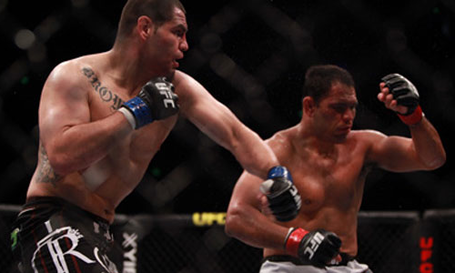 At this point it was clear to many people that Cain was in line for a title shot and he would get just that. Cain was matched up with Heavyweight Kingpin and a monster of a man, Brock Lesnar who held more than 25 lbs weight advantage over the 240 lbs Cain Velasquez. 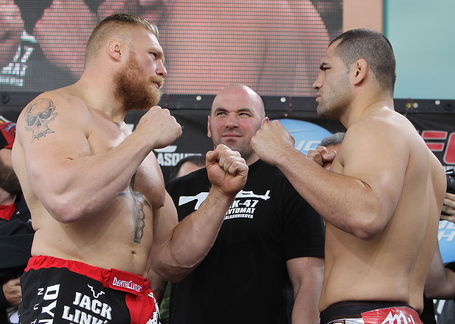 Much to the dismay of UFC President Dana White, Cain dispatched of Lesnar handily in the first round (4:12) after regaining his footing from being taken down by the behemoth and even managing to outwrestle the former 2 time NCAA National Wrestling Champion, after which he send Lesnar through a loop with furious strikes including a knee that opened Lesnar up and a slew of punches that put him away. 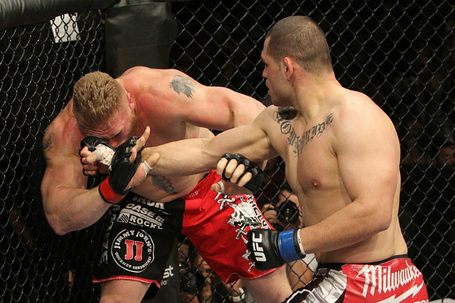 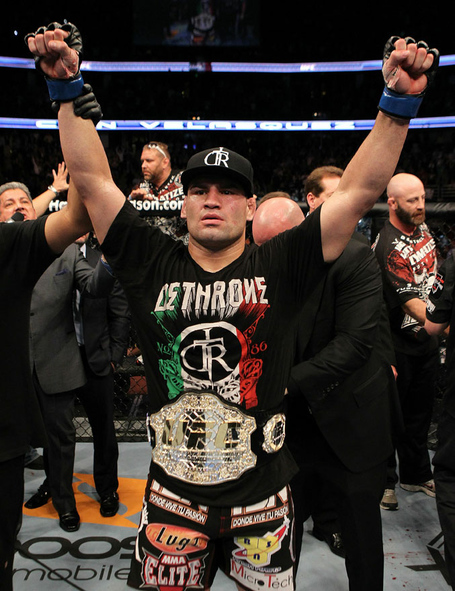 Cain's glory would be short lived this go around however. During camp he suffered an injury to his knee and trained hard to overcome it which in retrospect he admits may have made it worse. He came into his first title defense against dangerously heavy handed Brazilian fighter, Junior Dos Santos. Cain was TKO'd in the first round (1:04) on the UFC's first ever FOX broadcast (November 12, 2011). Cain was devastated. 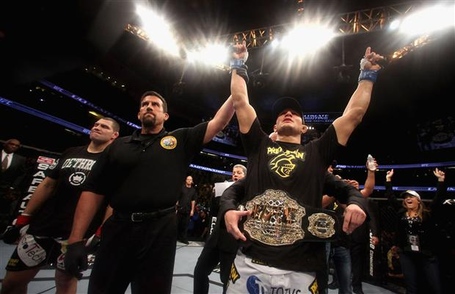 Cain would return to AKA and train harder than he ever had in his career. He stepped back into the Octagon and brought the fury of thousand Jaguar Warriors with him. At UFC 146 (May 26, 2012) the very same night newly crowned heavyweight champion Dos Santos defended his title against former champion Frank Mir, Cain returned and took on Brazilian fighter, Antonio "Bigfoot" Silva shades of his fight with Lesnar, Cain gave up 30-40 lbs to Silva but that didn't stop him from making extremely quick work of the Brazilian, Cain won via TKO in the first round (3:36) and left Silva in a bloody mess. 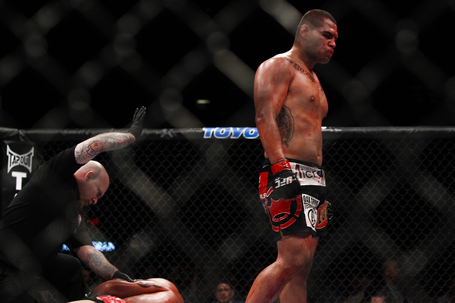 This win earned Cain a rematch with Dos Santos at UFC 155 (December 30, 2012), and this time Cain came prepared and injury free. He used a very smart gameplan as no one had seen just how good Dos Santos' gas tank really was Cain pressure him from start to finish of their second meeting, swarming Dos Santos, shooting for takedown after takedown and even landing several heavy shots on the renowned knockout artist. At the end of the fight, Cain was declared the clear winner via unanimous decision reclaiming the heavyweight title. 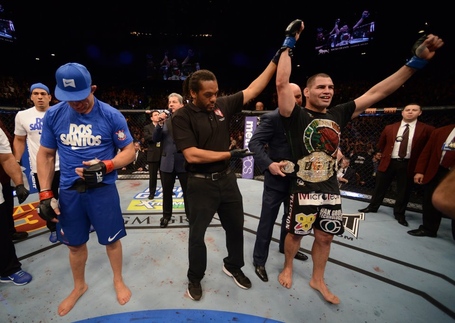 Cain would have no time to rest however, another Brazilian was seeking a rematch. Antonio "Bigfoot" Silva stunned the world which an upset win over title contender Alistair Overeem via third round KO in a fight many thought Alistair would end quickly. So once again Cain would face off against the Brazilian giant.

Cain defeated Silva once again via TKO in the first round (1:21) via punches at UFC 160 (May 25, 2013) in Las Vegas, Nevada. Afterwards the UFC scheduled a "Rubber" Match between Cain and Dos Santos who had a very impressive performance in which he knocked out famed heavyweight striker, Mark Hunt.

The two would meet yet again at UFC 166 (October 19, 2013) in Houston, Texas. Cain's major complaint with his win over Dos Santos was that despite throwing everything he had at the former champion he could not finish Junior. That would not be the case in the third fight. Cain employed much of the same strategy he did in the second fight only he was even more aggressive this go around. He rushed Dos Santos and used his quick boxing to set up takedowns and kicks. The fight was going very much so all to Cain, and in the third round he had only one slip up Dos Santos managed to buckled Cain's knees after catching him with an elbow on the inside, but Cain quickly recovered and took the fight right back to the Brazilian. In the fifth round Dos Santos attempted a modified standing guillotine choke on the champion, and during a powerful escape from Cain, Dos Santos landed on his head with Cain ontop of him, rocked by the impact he was quickly TKO'd by the champion and the Rubber match's conclusion was a finish at 3:09 of the very last round.

Thus Cain retained his title and proved he was the better fighter than Dos Santos by defeating twice in a row in dominant fashion. 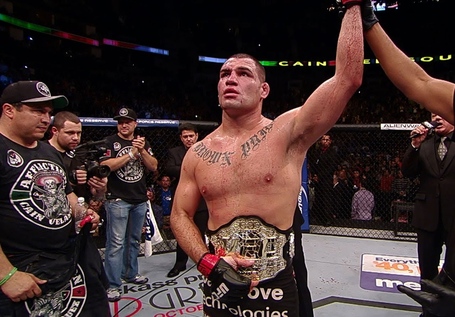 Cain is once again nursing injuries only this time he's in no rush to get back into the Octagon, having learned from his mistake in the first Dos Santos fight. He's scheduled to face Fabricio Werdum at the conclusion of The Ultimate Fighter: Latin America, which features the two heavyweights as coaches on opposing teams, targeted for November 15, 2014 in Mexico City, Mexico. 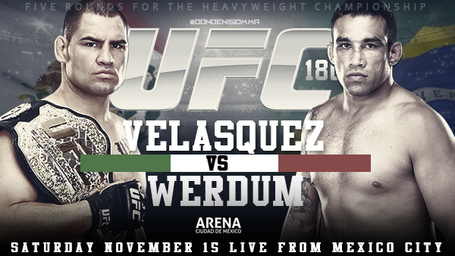 This article was written for my good friend, Manuel Fernandez who's a big Cain fan. Orale Vato! Lehgo Ese!

Cain Velasquez "Champions Get Back Up" by Nikki (via NikkiNeversleep)