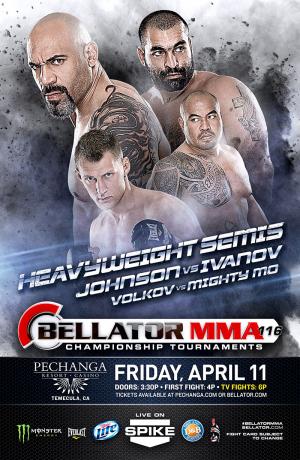 I'm back! I got a couple recs last time and I'm bored so why not do another one of these breakdowns. Now that the dust has cleared; Vitaly Minakov is still champion after a back and fourth affair, but edging Kongo out 4-1 in the score cards and moving to 14-0 in his career.

Keeping it in the Heavyweight Division, the tournament Semi-finals Main & Co-main event the Bellator 116 card this Friday.

After a devastating KO loss in his Bellator debut, Lavar "Big" Johnson bounced back with a win over Ryan Martinez at Bellator 111. Lavar "Big" Johnson will look to keep the ball rolling as he faces the undefeated Bulgarian Blagoi Ivanov. Ivanov is coming off an absolute war with Rich Hale where he displayed his all around game on way to a decision win.

The Co-main event pits legendary kick boxer Siala-Mou Siliga a.k.a "Mighty Mo" vs former Bellator HW Champion Alexander "Drago" Volkov. "Mighty Mo" Like Ivanov is Undefeated in Bellator and at 43 years old is still evolving, if he had entered and dedicated much sooner he could have been one of the greats. but at 6-2 with 10 kids to feed his time is now. Mighty Mo is on a 3 fight win streaks and despite being a striker his last two wins have come by way of submission. Alexander Volkov burst onto the scene by being a replacement in the bellator tourney and winning 3 straight on his way to becoming champion. Since then he had lost to current champion Vitaly Minokov, and wound up back in the tourney. With a win over Mark Holata the heavy favorite will look to claim his revenge by storming through this tournament and getting his title back.

Next up on the card is the Welterweight Semi-Finals pitting Strikeforce vet Nathan "Soulforce" Coy vs undefeated rising star Adam McDonough. "Soulforce" stepped in as an alternate in this tourney, but by the looks of it you'd think he had a full training camp, dispatching Paul Bradley and extending his win streak to 6. Adam Mcdonough overcame adversity in the first round where he was caught in a deep arm triangle to escape and work Jesse Juarez till the final bell rang claiming the decision.

To round out the card there is the last battle in the storied career of Vladimir "the janitor" Matyushanko as he takes on Joey Beltran in a LHW feature fight. 'The Janitor' is coming off a decision win over Houston Alexander at Bellator 99. He made it very clear on Frank Trigg's show that this is his last fight no matter the out come so look for him to go out with a bang. His opponent "The Mexicutioner" Joey Beltran is looking to bounce back after dropping two straight to Fabio Maldonado and "Rampage". This should be fireworks. When a fighters back is against the wall that's usually when the best one comes out.

Lavar Johnson is a very power striker who always goes for the KO, but lacks much ground skills, as you saw in the beginning of the Martinez fight. Ivanov is a very well rounded fighter and has power as well. If Johnson can tag Ivanov like Hale did, it's goodnight Irene, but I believe Ivanov will use his superior ground game to tire him and grind out the win. They will engage at some point but Ivanov will just take him down at will, and possibly finish him late. My Prediction He keeps his undefeated streak alive against "Big": Ivanov UD

Mighty Mo vs Alexandor Volko. All of you know I'm the biggest supporter of Mighty Mo, always have been since I saw his first kickboxing bout and found out he also did MMA I mighty jinxed Grove at 114 by pumping him up so much so (knock on wood here) I'm gonna judge them evenly. Volkov tends to be a bit of a slow starter but gets better as the fight wears on, and Mighty Mo has devastating power, if he can clip him early like Minakov did we mighty see a flash KO. Volkov will look to take this to the mat and tire him and go for the late finish. All around I believe Volkov is the better fighter because of the experience, but my Mighty Mo fandom is gonna get the best of me here and I'm going with the tremendous upset here. Mighty Mo 1st round TKO.

Nathan Coy vs Adam McDonough. I see this fight pretty straight forward. Adam is on a roll and is a very well rounded fighter but he has never really wowed me. He'll come in with a good gameplan mix up his strikes and takedowns, but at the end of the day "Soulforce" is the superior fighter and I see him having his way with Adam here. He will pick him apart in the striking and stop all his takedowns. McDonough is a tough dude though so I don't think he'll finish him. My prediction: Nate Coy UD

Vladimir Matyushenko vs Joey Beltran: Joey Beltran has his back against the wall here desperately needing a win but "The Janitor isn't just gonna hand it to him. Matyushenko along with the power in his hands (which he displayed in his 20 second KO over Jason Brilz) is a very decorated wrestler holding many championships. Joey Beltran loves to strike but has been known to wall and stall as of late. Expect these two to come out and engage, but once Beltran feels Vladimir's power he will look to tie things up and push him against the cage. The janitors wrestling credentials however will not let that happen. I think The Janitor mixes it up nicely and beats him in every aspect, to send his long career out on a really good note. My prediction Vladimir Matyushenko 2nd round tko

This card is stacked top to bottom with some of bellators best talent and big names in general and I am really excited about it. If you made it through Thanks for reading, and Post in the comments below about the fights your looking forward to most and who you think will win. Have a good one. See you next time.