Brad Tavares is promising Michael Bisping a hump-free fight. Then again, we all know what happened the last time two fighters had a "gentlemen's agreement" about takedowns.

What do Brad Tavares and Michael Bisping have in common?

Well, they both compete at 185 pounds after cutting their teeth on The Ultimate Fighter (TUF), and both are coming off a loss to muscular wrestlers. As far as mixed martial arts (MMA) matchmaking is concerned, that as good a reason as any to start drawing up contracts. 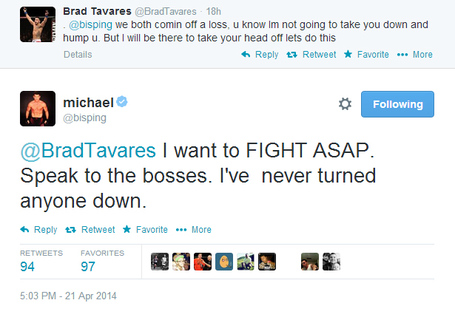 Tavares (12-2) continues the "when in doubt, call Bisping out" trend among middleweights.

The Hawaiian was recently ragdolled to a unanimous decision loss, thanks to the meaty takedowns by Olympic wrestler Yoel Romero, who ran the table at UFC on FOX 11 last weekend in Orlando (results). Similarly, Bisping (24-6) was dumped and humped en route to a five-round defeat by way of Ranger justice at TUF: "Nations" Finale earlier this month in Quebec (highlights).

Both fighters seem to favor the potential match up ... how about you?