A report that came out last November, in response to the "kill switch" anti-theft measure, claims that 1 in 3 robberies in the United States involve smartphones.

In the old days, when someone swiped your cell phone, they sold it on the black market, made a few bucks, and went on their merry way. These days, they prefer to pose as the owner, send out homophobic slurs, and post embarrassing selfies.

That's what happened to Ultimate Fighting Championship (UFC) light heavyweight titleholder Jon Jones, who somehow managed to have his smartphone lifted during his UFC 172 training camp. Once the digital do-badder got his hands on the prized possession, he did what any master thief would do.

He called some kid from Sweden a "fag." 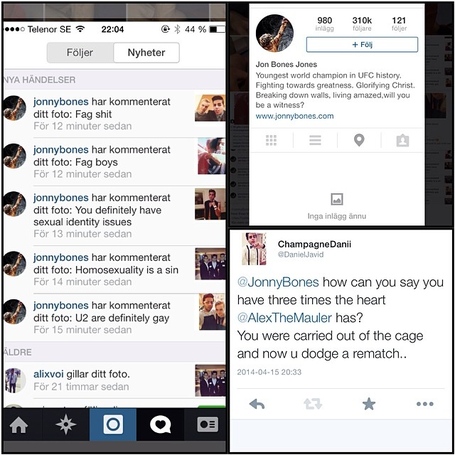 Once word got around that faux-Jones was hurling the F-word, Team Bones took to social media (after some initial confusion) to assure the mixed martial arts (MMA) universe that it was nothing more than an impostor, taking liberties at the champ's expense. 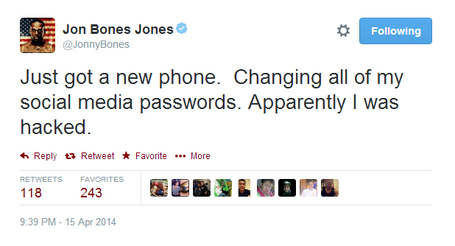 As Jones alerted fans he was "hacked" and scrambled to get a new phone -- and change all his of existing passwords -- the burdensome bandit got in one last jab, posting an embarrassing "selfie" of Jones sticking his tongue out.

An investigation is almost certainly underway.

The promotion has zero tolerance for homophobic slurs and recently handed down a stiff punishment to UFC lightweight Nate Diaz, who also called someone a "fag" using social media. His phone wasn't stolen, that's just how people talk in the 209.

In other news, acting is kinda gay and Michael Bisping is not a queer.

For a closer look at the UFC Code of Conduct click here. For more on Jones upcoming fight at UFC 172 click here.