According to his manager (via MMA Fighting), the catastrophic injury to Spong's shin has forced him to return to the United States for immediate surgery.

ISTANBUL -- The much anticipated GLORY 15 light heavyweight tournament final between the "Turkish Tyson" Gokhan Saki and Tyrone Spong came to a shocking conclusion at the 1:37 mark of the first round.

In eerily similar fashion to Anderson Silva vs. Chris Weidman at UFC 168, Spong threw a hard low leg kick that Saki checked with his knee. Spong's leg visibly gave and the Dutch-Surinamese fighter immediately went to the ground and raised his hand up appearing to be in shock.

Then, in an amazing sign of showmanship, Saki went down to Spong and hugged him as referee Al Wichgers waved it off. Saki officially wins by knockout to become the inaugural GLORY light heavyweight champion.

"During the fight, after I blocked his kick I saw his knee was broken and he went down," Saki said through a translator. "I went to him and he asked me 'Did I break my knee?' and I said yes, just calm down and everything is going to be fine."

Spong won a unanimous decision over Saulo Cavalari to advance to the final. Now the GLORY light heavyweight champion, Saki, had the easier path to the final with a technical knockout over Nathan Corbett in the first round. After connecting with a big left hook, a cut opened up on Corbett's left ear and referee Al Wichgers halted the action for a doctor to check on Corbett.

The doctor confirmed Corbett could no longer continue and Saki was awarded the KO victory.

Spong was take to Marmara University Hospital in Istanbul. MMAmania.com spoke with Rashad Evans, but he couldn't provide any further detail saying, "I can't say." He added, "He will be alright." We will have more news coming on Spong and his injury as soon as we get it. 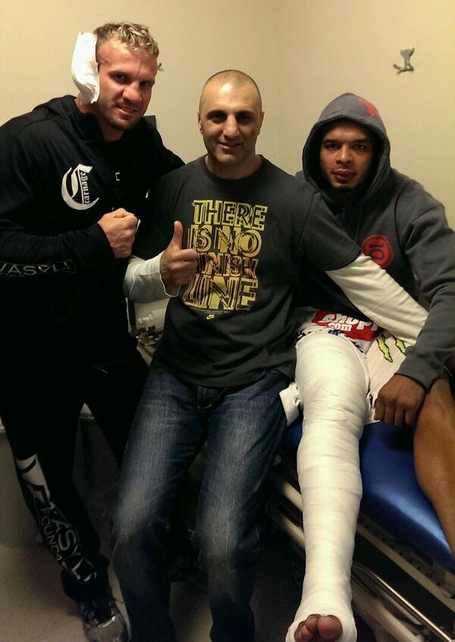