Just yesterday, my comrade Jesse Holland brought word that Vinny Magalhaes was forced to pull out of his planned match at Metamoris 3 -- an event that saw Eddie Bravo and Royler Gracie go to a draw in an awesome rematch -- due to what he initially believed was an ingrown hair.

It was much worse.

A quick trip to the emergency room revealed a staph infection. The initial photo was gnarly (see it by clicking here) but he's been providing updates via his Twitter account and the good news is that he's healing well.

He was even nice enough to post a photo showing his progress and OH MY GOD WHAT IN THE HELL IS THAT?!? 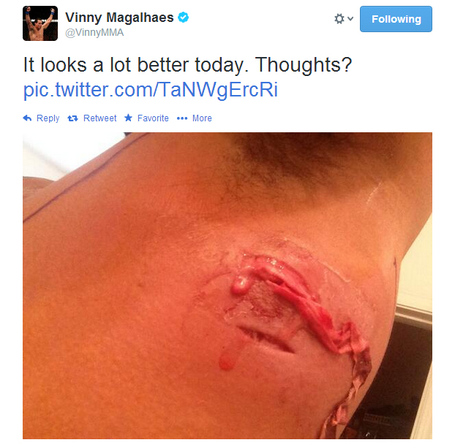 It looks like a badly disfigured head is trying to break through the skin and is crying thick tears of blood and pus. It almost looks like the cover of Metallica's Load album if it were attached to a body. It's nasty but necessary to drain the excess fluid and keep the wound clean and free from further infection.

In fact, we need a distraction. Let's click here and look at Lyoto Machida hiding from an earthquake by huddling with his family under a table.