Here's a crazy idea that some might not think all that crazy: Johny Hendricks vs. Nick Diaz.

Now that Johny Hendricks is officially the welterweight champion following his unanimous decision victory over Robbie Lawler in the main event of UFC 171 last night (Sat., Mar. 15, 2014) in Dallas, Texas, it's time to start looking ahead to his first title defense.

There are plenty of viable candidates but one possibility may surprise you: Nick Diaz.

So how about it, Dana White? From the UFC President's interview with Fox Sports following last night's event:

"Who knows? Nick Diaz was there heckling Hendricks the entire fight. He's trying to get a title shot. I have no idea (if he's going to fight again). He hasn't talked to me about fighting."

This after Diaz was heckling Hendricks at the weigh-ins the night before.

While White may not have spoken with Diaz just yet, the Stockton slugger has already announced a desire to make his comeback. With Georges St. Pierre out of the picture -- for now -- the welterweight landscape is wide open and begging for a top of the line pay-per-view (PPV) draw.

Diaz seems to think he can deliver on that end.

But against Hendricks? For his part, he told assembled media at the UFC 171 post-fight press conference that he wasn't even aware it was Diaz who was heckling him during his weigh-in. He "thought it was a fan".

Even if "Bigg Rigg" is up for it, how could the UFC justify to its fans the idea of giving a title shot to a man who has lost two fights in a row and hasn't seen the inside of a cage since March 2013? 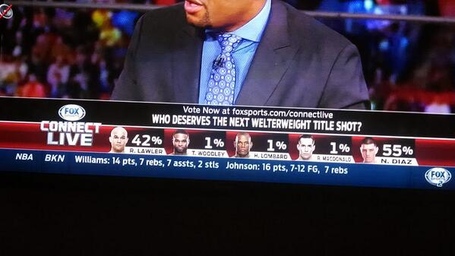