This is somewhat surprising, and maybe even unbelievable.

Even if you watched the Johny Hendricks vs. Robbie Lawler main event bout at last night's (Sat., Mar. 15, 2014) UFC 171 pay-per-view (PPV) from the American Airlines Center in Dallas, Texas, and agreed with the judges scores -- 48-47 across the board in favor of Hendricks -- you may not realize just how the judges got there.

Take a look at this: 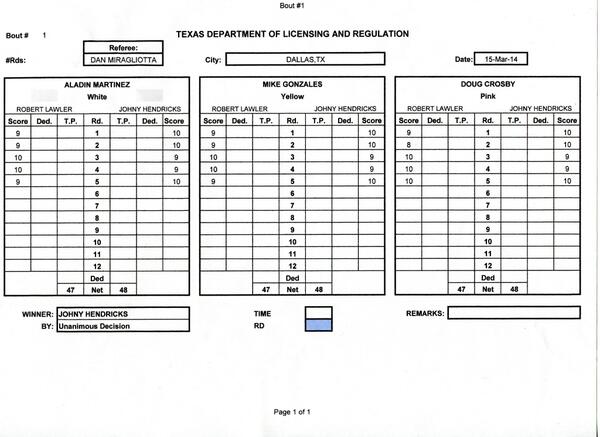 Then we have Crosby, who, for whatever reason, scored round two 10-8 for Hendricks and had the two even at 10-10 in the fifth and final round. That is a stunning scorecard, mostly because you won't likely find a pundit anywhere on Earth who agrees with it.

Which leads me to you, dear Maniacs. Does that scorecard look sane to you? Or is Crosby right and everyone else wrong?

For more on "Hendricks vs. Lawler" click here, and for complete UFC 171 results and blow-by-blow coverage of all the night's action click here.