Four top welterweights. One will be champ and one will be his next title contender. Can you spot them?

As the name suggests, UFC 171 will feature a monster main event showdown featuring Johny Hendricks against Robbie Lawler for the vacant 170-pound title, thanks to Georges St. Pierre's abrupt departure from the sport of mixed martial arts (MMA).

But that's not the only game in town.

In the UFC 171 co-main event, Carlos Condit will attempt to climb back to the top of the welterweight mountain against Strikeforce import and gritty wrestler Tyron Woodley, who is also hoping a big finish in "The Lone Star State" propels him into a title shot.

Here's a look at their staredown pic from today's UFC 171 media event (via Esther Lin for MMA Fighting): 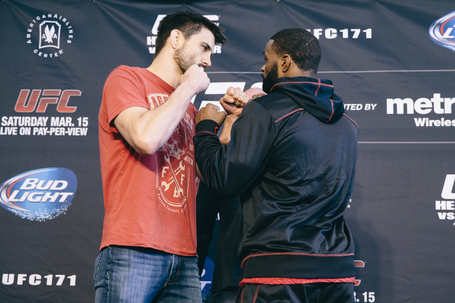 MMAmania.com will provide LIVE round-by-round, blow-by-blow coverage of the entire UFC 171 fight card on fight night (Sat., March 15, 2014), starting with the Fight Pass "Prelims" matches online, which are scheduled to begin at 6 p.m. ET, right on through the FOX Sports 1-televised under card bouts at 8 p.m. ET and then main card PPV, which is slated to begin at 10 p.m. ET.

To check out the finalized UFC 171: "Hendricks vs. Lawler" fight card and line up click here.