For just the second time in the history of the promotion, two female warriors will headline a major mixed martial arts (MMA) pay-per-view (PPV). But, somehow, the major storyline is the co-main event, which features bad blood between Daniel Cormier and Patrick Cummins, which spilled over today on the dais when the pair got too close for comfort.

To watch the "Rousey vs. McMann" press conference in its entirety click here.

But, that's not why you're here.

The best part of the press conference -- just like the pre-fight weigh ins -- happens to be the fighter staredowns, which fortunately, we have in earnest. Not only did "Rowdy" come nose-to-nose with her bantamweight rival, but fellow Olympian Daniel Cormier got to eyeball Patrick Cummins for the first time since Cry-Gate.

And he greeted him with a shove (.gif via ZombieProphet ... click here if it doesn't load below):

Bringing up the rear is the welterweight showdown pitting jiu-jitsu wunderkind Demian Maia opposite division top talent Rory MacDonald, with the winner staying relevant in the 170-pound title chase and the loser going home to figure out what went wrong. 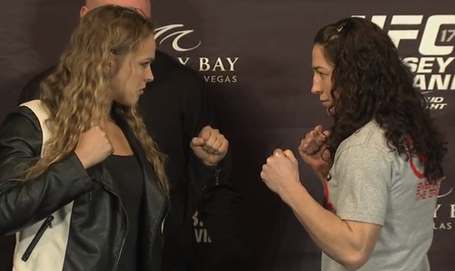 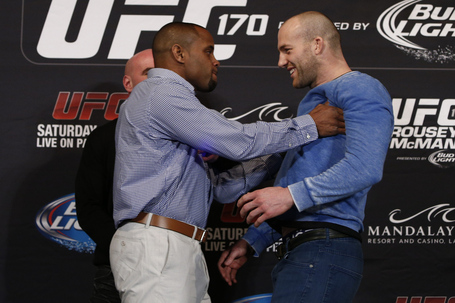 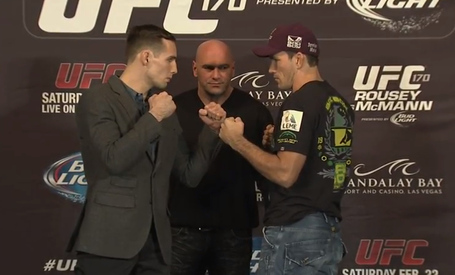 There you have it.

MMAmania.com will provide LIVE round-by-round, blow-by-blow coverage of the entire UFC 170 fight card on fight night (Sat., Feb. 22, 2014), starting with the Fight Pass "Prelims" matches online, which are scheduled to begin at 7 p.m. ET, right on through the FOX Sports 1-televised under card bouts at 8 p.m. ET and then main card PPV, which is slated to begin at 10 p.m. ET.

For the finalized UFC 170 fight card and line up click here.