Sorry kiddies, this one is rated "R." For Righteous!

Share All sharing options for: Pic: Gina Carano 'In the Blood' movie poster and release date

The former Strikeforce featherweight and one-time "face of women's MMA" is returning to select theaters -- as well as On Demand and iTunes -- on April 4, 2014 for the action-thriller "In the Blood," directed by John Stockwell and jointly distributed by Anchor Bay Films and Twentieth Century Fox Home Entertainment. 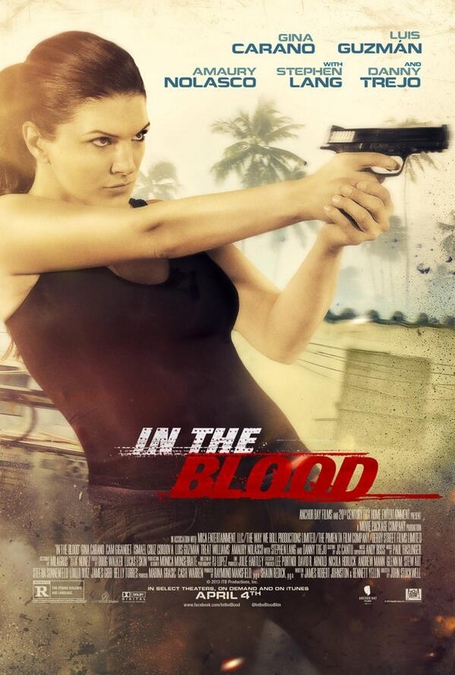 What's it all about?

Some dopey guy marries the hotness that is "Conviction" and ends up getting kidnapped. Because she's a badass and he isn't, she has to go rescue him but then thinks he's dead and must avenge his death -- but oh noes -- a conspiracy is uncovered! How deep does the rabbit hole go?!?

I'm paraphrasing, of course, because it doesn't really matter. I'm in either way.

Carano, who got her big-screen start in Steven Soderbergh's "Haywire" (review), hasn't seen the inside of the cage since getting worked by Cris Cyborg back in August 2009. She's flirted with the idea of returning on several occasions and insists she "hasn't ruled it out."

But for now, the phone is still ringing.

She's managed to keep herself afloat in "Tinseltown" with a variety of high-profile movie projects, recently wrapping up filming on "Fast & Furious 6" (see her red carpet pic here), as well as pre-production on a female version of "The Expendables."