Cris Cyborg fires back at Dana White: Either test me for steroids, or stop making accusations

Because the Brazilian says she's tired of having her entire career judged by one mistake, when that same standard does not apply in UFC.

Share All sharing options for: Cris Cyborg fires back at Dana White: Either test me for steroids, or stop making accusations

When Ultimate Fighting Championship (UFC) President Dana White was interested in booking a women's bantamweight title fight pitting Ronda Rousey against Cristiane Justino, he was as accommodating as possible, even offering to pick up the tab to have Mike Dolce get her to 135 pounds.

But once she didn't sign on the dotted line, she because an ugly steroid user. 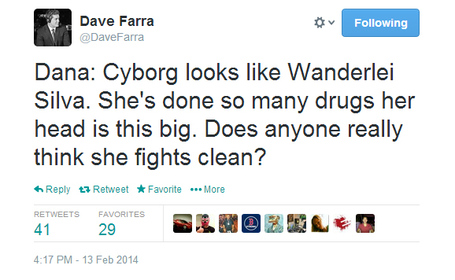 That was the message White delivered during a recent media luncheon, which stand in stark contrast to the challenge he issued to reporters earlier in the day, demanding they provide evidence that any one of his fighters was doping. If not, then shut up about it.

"Give me one [expletive] name right now, I'll get them on the phone, and somebody will drive to their [expletive] house today and will test them," White said. "Say it. Say it."

After pausing for a second to silence, he resumed.

Two can play at that game.

After getting word of White's comments, Justino fired back at the UFC president, telling him that not only does he have no right to accuse her of using performance-enhancing drugs (PEDs), but that he's welcome to test her at any time if he believes he has a legitimate case.

"Nobody has the right to accuse you without evidence. I have explained many times that the doping episode was an error during the weight loss for that fight, and it is our mistakes that we evolved. Just because we are not perfect, we have no right to judge anyone. Two years have passed since then, I have performed suspension, I resumed my career, I returned to be with the help of champion Tito Ortiz and George Prajin, who extended my hand when everyone else turned away from me. And, finally, fought three times since, and was tested in two of the last three fights. Can test me today, tomorrow or whenever they want. I'm with a clear conscience. I cannot be judged for the rest of my life for a mistake I made two years ago. I do not want to remember my whole career by the only mistake I made."

Justino failed for stanozolol in early 2012 (read her explanation here).

UFC fighters Vitor Belfort and Josh Barnett -- both ranked in the top 10 of their respective divisions -- have previously failed for steroids. And getting popped twice hasn't kept retired light heavyweight Stephan Bonnar out of the UFC Hall of Fame.

So why pick on Justino?

Probably because Rousey is still heckled by fans about a future "Cyborg" fight, which fell apart while the Brazilian was being managed by Tito Ortiz, who (surprise) is also hated by White. That's why Ortiz stepped down as her manager (more on that here) and asked that she be judged on her merits as a fighter, and not by her association with the "Bad Boy."