Here is your UFC 170 main event ladies (and gentlemen), going face-to-face for the first, but certainly not the last, time. "She's got Bette Davis eyes..."

Chances are the whole scene would have been better if it was open bar, but since we weren't invited, we'll have to assume that this pic was as good as it got. And it will likely only get better when both undefeated stars step inside the Octagon and punch each other in the face for the right to be called world champion.

Check out another pic from Esther Lin, who was on the scene, which depicts Rousey having the time of her life: 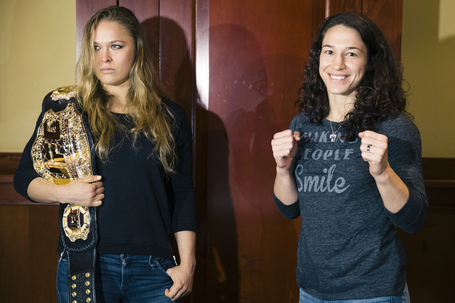 For more on "Rousey vs. McMann" be sure to check out the latest UFC 170 fight card and rumors right here.