Note: To those who care, Part 1 can be found here:

Rumors are flying that Belfort failed his drug test. I remember a close friend of mine telling me he’d be more shocked if Lindsey Lohan was sober and had her hymen.

Coach Sonnen is growing on me...

I admit I was one of the heterosexual guys that came when Anderson Silva said: "Ayo break your face, Man! Ayoooooooo Break. Your. Face!" just 6 months earlier, so at the time I never would have thought…

I remember seeing this event at a bar.

I really wanted to see Aldo versus Edgar and the return of the "Mighty Horse-Eater" (after his suspension for an EPIC, beyond the ken of mortal men, 14 (Fourteen!) -to-1 testosterone-to-epitestosterone (T/E ratio) versus the man they erected the Easter Island statues in honor of.

Truth be told. I was also curious about Fitch (the only man who fights to the death, yet still wins by decision) versus Maia.

After spending a couple of weeks and 2 whole rounds enduring constant smugness, condescending smiles and verbal jabs (it was knees during the fight) from Overeem, Bigfoot does THIS.

Sheer chaos erupts and the entire bar lets out a collective "Holy fuck!" as Herb Dean restrains Big Foot from eating Overeem right there and then in front of the Dead Man Down sign. 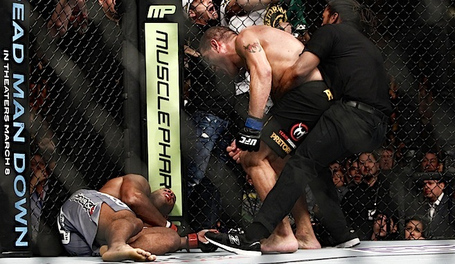 Note 1: The .GIF gets funnier if you imagine Big Foot screaming: "Yeeeeaaaaaaargh!" or"Muuuuuuuarrrrrrgh!!" as he’s beating the living shit out of Overeem.

Note 2: To this day, every time I think of this Overeem KO. I smile from ear to ear. Giddy laughter ensues.

One would assume that after the savage thrashing endured at the hands of the Missing Link, Overeem would have learned not to fight using the "hands down-chin up" technique.

That lesson was not learned and will be covered in: Why 2013 kicked this MMA Fan’s @ss Part 8: August: Yes, that just "Hapa"ned.

On that same card:

We then follow this with a Free Card: Barao vs McDonald and then UFC 157 for the first women's fight in UFC history.

After a very touching Primetime series (It made the wife cry. Me? I had something in my eye…) on both the Champ (before her heel-turn) and Liz Carmouche, it’s time to make history.

And here we go! (God I hate you, Goldberg)

Ronda Rousey proves she’s so far ahead of the game (sorry ladies) by rationalizing that: If a former Marine has your back and is choking you out, it’s best to fix your sports bra to prevent a nip-slip before you defend the hold. 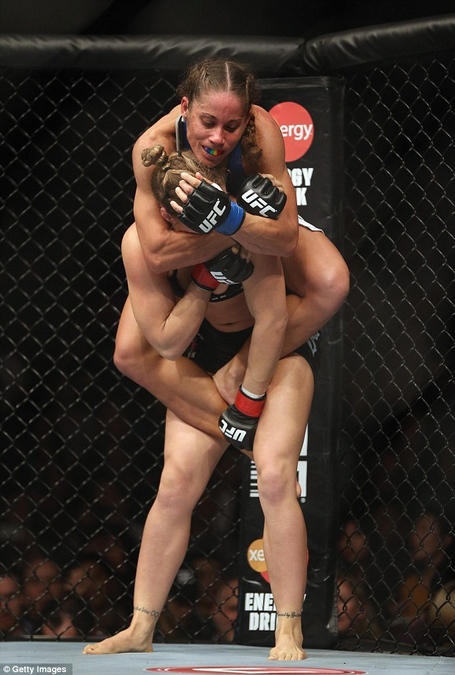 Unfortunately, Machida vs Henderson and Lavar vs Schaub turned out to be exactly the kind of fights that:

A - Show them to someone who has never watched MMA
=
B - It's a guarantee they'll never watch MMA again.

Note: Same logic applies to all Brendan Schaub fights, unless he’s being knocked out in devastating (Nog & Nelson) and/or amusing (Rothwell) fashion. In which case, his fights become instant "must see TV".

However, Liz Carmouche’s twin brother celebrating his victory, after having scaled Menjivar's back like a howler monkey in search of ripe fruit, was a Kodak moment. 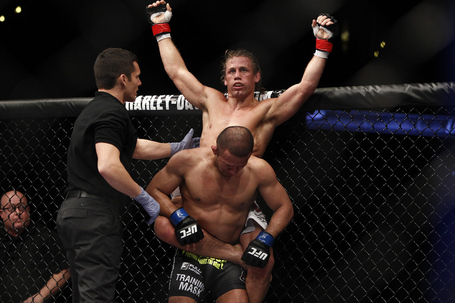 To the dismay of dozens (and the joy of thousands), both Fitch AND Volkmann get cut from the UFC. A collective sum of zero fucks are given around the globe.

In what can only be described as spinning death foot, TUF 17 contestant Uriah Hall decapitates fellow contestant Adam Cella.

In a huge upset, Emanuel Newton knocks King Mo out with a spinning backfist and gently cradles him in his arm (and sings him a lullaby) as the latter falls to the canvas, separated from his consciousness.

Quote of the Month

"Not a day goes by where someone doesn't thank me for the Bisping knockout, I've never had any other opponent I ever fought where people were like ‘please beat him up' and ‘please shut this guy up.' Usually they compliment me for something I did, not because the other guy is an @sshole."

That does it for February. Thank you for reading. Coming up next (God, I hate you Goldberg): Why 2013 Kicked this MMA Fan’s @ss Part 3: March Madness