After much reflection and discussion with other MMA savants, I’ve come to realize that 2013 was simply insane and that quite frankly, it deserves our respect.

In fact, if 2013 were debating with us, right now, on its merit of being the "Sickest MMA Year of All Time", it would be punctuating all its arguments with a Jesse Pinkman inflected "Bitch!!"

Here is why it personally kicked my ass:

I remember feeling sad as an MMA fan heading into 2013. I had just hosted Junior vs Cain II at my place during the holidays and my boy Junior (my wife’s favorite: "He's so nice, you just want to hug him!") had gotten his face demolished and re-purposed into a human Shrek mask with extreme prejudice by Cain.

He also got booed out of pure ignorance by the obviously demented and intoxicated Vegas crowd for his valiant and brain stem pulverizing effort, and proceeded to call these ingrates on it by trying to articulate: "Why you people do that?" through his grotesquely deformed lips.

So, in my case, it is with a heavy heart that we start off the year with the final Strikeforce event and then the free Vitor Belfort vs Michael Bisping on FX.

This fight has possible title implications for Michael Bisping (some would say that Bisping fighting for a title will only happen when Hobbits' feet are hairless) as he was on a real hot-streak at the time, with only 1 "questionable" (whatever the fuck that means these days) loss versus the self-proclaimed, undisputed UFC Middleweight People’s Champion Chael Sonnen.

Talks of hypothetical Silva versus Bisping in a Manchester soccer (or football) stadium were abound, as well as a possible knighting by the Queen (Elton or Elizabeth depending on availability and/or prior commitments) should Michael pull that one off.

Vitor, on the other hand, was coming back to his "natural" weight division for this fight after almost armbarring Jon Jones.

For his return to middleweight, the Lionosaur also unveiled the most hideous haircut known to mankind: the Mullet-Mohawk. A monstrosity of a coif that would make the most fervent redneck put down his moonshine and high-five his sister-wife. 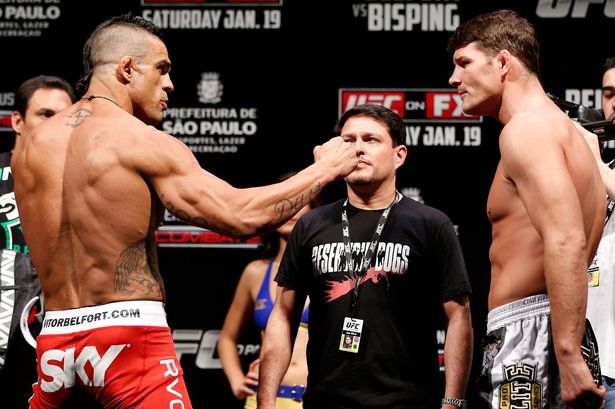 Oh, he also sported a certain je ne sais quoi… (quoi being a Mattel He-Man chest) physique at the weigh-ins…

After 2 good fights and a CB Dollaway fight (also known as a bathroom break), we get to the main event.

And here we go! (God I hate you, Goldberg)

Shot of Anderson smiling in the crowd! I’m amped!

Not a Belfort fan - the whole "Cheezits" thing doesn’t do it for me. Not a Bisping fan either. Quite frankly, the only reason I wanted Bisping to win was so that Anderson Silva would cause him great harm in Manchester…

Bisping coming out for the second round looking good and then:

Legend has it Anderson Silva ran backstage and yelled: "You stupid donkey! You facked everything up!" at Michael Bisping as he was being stretchered out to the ambulance.

Meanwhile, Belfort calls out Jon Jones, Sonnen and Satan in his epic: "Everyone but Cheezits is ducking me, Bro!"* post-fight speech interview with Rogan.

The Lionosaur then proceeds to leave us with this little gem at the post-fight press conference:

Rampage loses his bout in an exciting one, but is given zero post-fight airtime with Rogan.
The little guys do their thing.

We got to see the new format of the Ultimate Fighter - Jones vs Sonnen, back to the Tuesday format after the Carwin versus Nelson fiasco.

Strikeforce becomes the latest addition to the Zuffa tombstone.

That's it for January. Thank you for reading. Coming up next (God I hate you, Goldberg): Why 2013 kicked this MMA fan’s @ss Part 2: Women and Angry Giants Rule February