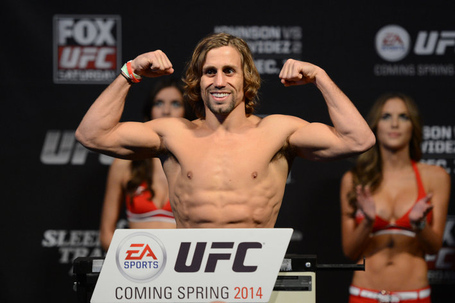 UFC 169 Barao vs. Faber II is this Saturday night (Feb 1, 2014) and it's main card is pretty solid. The overall card isn't as stacked as some have been in the past but two title fights and a barn burner heavyweight bout (for at least a round) make up for it. I'm excited for it, as the event poses some interesting questions:

-Will Faber finally win a UFC title?
-Is Barao going to be the long term UFC Bantamweight Champion?
-Will Aldo move up to Lightweight with a victory?
-Which Alistair Overeem will show up?

Let's look at some of the finer details.

Here are the breakdowns of the Co Main and Main Events:

Lamas has a solid grappling base but is well rounded with a kickboxing based striking attack. He just recently obtained his BJJ black belt after being a brown belt for approximately 3 years. Decent striking defense at 64% but poor takedown accuracy at 38%. Has fought pretty decent competition.

It's Jose Aldo. What should stand out is his 92% takedown defense rate and 74% significant strike defense rate.

Faber is nothing less than a pound for pound top level fighter. His numbers speak for themselves. However, it's worth nothing that since his loss to Barao in July 2012, his significant striking accuracy has been 61%(193 of 312) over 4 bouts with a overall striking accuracy of 71% (334 of 470). His striking has improved a lot under Ludwig.

Overlooked by many, Barao has been fighting top level fighters for several years and has proven to be difficult to takedown and impossible to defeat. Out of 8 WEC/UFC wins, Barao has finished 5 of them.

MMAmania.com will provide LIVE round-by-round, blow-by-blow coverage of the entire UFC 169 card this Saturday night, starting with the Fight Pass "Prelims," which are scheduled to begin at 6:30 p.m. ET, right on through the FOX Sports 1-televised under card bouts at 8 p.m. ET and then main card PPV action, which is slated to begin at 10 p.m. ET.