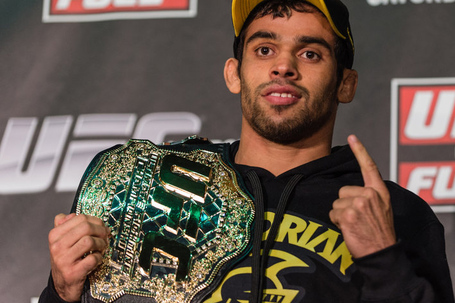 UFC 169 Barao vs. Faber II is this Saturday night (Feb 1, 2014) and it's main card is pretty solid. The overall card isn't as stacked as some have been in the past but two title fights and a barn burner heavyweight bout (for at least a round) make up for it. I'm excited for it, as the event poses some interesting questions:

-Will Faber finally win a UFC title?
-Is Barao going to be the long term UFC Bantamweight Champion?
-Will Aldo move up to Lightweight with a victory?
-Which Alistair Overeem will show up?

Let's look at some of the finer details.

Abel has the ability to hit very hard, and though he has a good background in wrestling, his take down defense has not translated well to MMA sitting at just 37%. To be fair prior to his bout with Nurmagomedov he stopped 80% of the take downs against him in his prior bout. But against the Eagle he didn't fair so well, with Khabib completing 21 of 27 takedown attempts. His opponents outside the UFC weren't terribly impressive.

After starting his career at 6-5, he's 17-1 in his last 18 fights. He has fought quite a few fighters with a big size advantage over him and with a 61% finish rate he's pretty impressive. His ability or rather inability to make weight has been his biggest issue in the UFC.

Ranks and titles don't follow you into the Octagon, but gawddamn... and I didn't even list all of the titles he's won. He hasn't beaten top fighters in MMA (yet), but he is a good finisher at 75%.

He was labeled a can crusher by many, but the numbers don't add up to that. His quality isn't as high as GSP but higher than many. His 94% finish rate is outstanding in addition to having very good takedown defense at 77%. He's lost his last 2 and this will be his last chance to make a run for the title.

His quality of opposition has been very high during his career because he's spent so much time in the UFC. His striking defense is poor at only 39% but finishes 75% of his wins.

Due to the length of the Article the Co-Main and Main Event had to be moved to a second post.

MMAmania.com will provide LIVE round-by-round, blow-by-blow coverage of the entire UFC 169 card this Saturday night, starting with the Fight Pass "Prelims," which are scheduled to begin at 6:30 p.m. ET, right on through the FOX Sports 1-televised under card bouts at 8 p.m. ET and then main card PPV action, which is slated to begin at 10 p.m. ET.