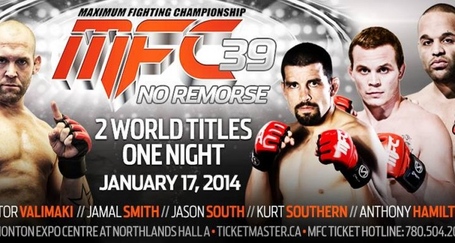 You're most likely an avid MMA fan if you're on this site. That's who is attracted here. The hardcore fans come out to comment on the very first prelims all the way to the end of the card. The true hardcore fans were up at the butt crack of dawn to watch UFC Fight Night 34 on Fight Pass.

AXS TV Fights are almost weekly and have fighters ranging from up and coming prospects, grizzled veterans and out and out journeymen. There are a handful of promotions who contribute to AXS TV fights from XFC to MFC to RFA along with Lion Fights which is a Muay Thai promotion out of Las Vegas. These fights are worth watching or at the very least DVR'ing.

I know everyone doesn't have AXS TV and don't want to pay for it. But there are some good fights to be seen here in addition to Inside MMA which I find is a worthwhile watch itself... most of the time.

Even if my picks are completely wrong, at least people are being made aware of free fights on TV.

So I'm going to start previewing the AXS TV events.

Davidson defeated Krahn in July of 2013 by Guillotine and all 8 of his professional victories are by submission. Of Krahn's 8 defeats, 5 have come by way of submission. Krahn has won his last 2 after a 2-6 streak beginning in 2010. Davidson by submission, Round 2.

Not much is known about Gerbinski that I was able to find or even the correct spelling of his name apparently as it's been spelled two ways. He has amateur bouts listed as far back as 2010 with a couple of submission wins there in addition to his pro debut in October. There are some very sloppy videos of his amateur fights on Youtube. McComb has been finished only once in his career; his pro debut in 2010 when he was knocked out in 13 seconds. Kind of a crap shoot: McComb by submission, Round 2

Baghdad is a French Muay Thai specialist training out of Team Quest. He is a world champion kickboxer and hasn't lost an MMA bout since 2011. He has fought from featherweight to welterweight but prefers 155 lbs. Expect him to be a bit undersized in this bout. Powers has won two in a row and is a one time Bellator veteran with 7 of his 8 wins coming by submission. Powers had been finished by strikes twice his his career and will look to avoid the stand up with Baghdad but I don't think the fight goes his way. Baghdad by knockout, Round 2.

Ring has lost his last two fights after starting his career 5-0-1. He has only defeated one opponent inside the distance back in 2011 by submission. McInnes lost his pro debut in 2011 but has since won 3 straight by submission. It should be noted that his nickname is "Andrewconda." Interestingly his second win came by a rare gogoplata. McInnes is a huge step back in competition for Ring after his last two fights. Ring seems to be the better striker but lacks power. I expect this fight to hit the mat sooner rather than later and for "Andrewconda" to dominate and get the sub. Mclnnes by submission, Round 1.

Valmaki is the former MFC 205 lbs Champion and a UFC Veteran, going 0-2 between 2006 and 2007 in the worlds largest MMA promotion. He has not fought since February 2012 in a fight that he won. However, prior to that he was stopped by strikes 3 times in a row in 2010, meaning he's only fought once in about a 3 year period. He has been stopped by strikes in 5 of his 8 losses. O'Connell has not been terribly active himself but has won 5 in a row since 2011 and has finished half of his 14 wins by strikes. O'Connell has been submitted twice in his career and 6 of Valimaki's wins are by submission. Valmaki will have a home field advantage and will likely have the crowd on his side, but that will not save him: O'Connell by technical knockout, Round 1.

At 6'3", South is going to be a massive welterweight and at age 36.... makes me question if his body will handle it well. In South's previous fight he fought Sam Alvey for the MFC Middleweight Title and was (T)KO'd at 4:56 of the fifth round. Smith has won 2 in a row after being submitted by Bubba McDaniel at the Ultimate Fighter 17 Finale in April. Smith has never finished an opponent with strikes and will never be a great striker. Smith may be younger but South has 9 career submission wins and Smith was submitted quite recently so if it hits the mat I know who I favor and it eventually will. South by submission, round 3.

Southern was 2-1 in 2013 after taking the second half of 2011 and all of 2012 off. He has finished 10 of his 13 wins but favors the submission game. Southern's reach is listed at a mere 65" so he will give up 8 inches to his opponent this Friday. Gallicchio is just 1-2 in his last 3 and fought only once in 2013, winning that fight after a year and a half long layoff. They have similar winning rates and both have multiple submission victories. Ironically both have been submitted 4 times, and both have been armbarred 3 times. I think these guys will probably play sloppy kickboxing for 5 rounds. Even with his shorter reach I favor Southern in the stand up. Southern by unanimous decision.

The champion Mr. Hamilton has finished his last 5 wins including a massive head kick over Smealinho Rama to win the MFC Heavyweight Title in his last outing at MFC 38 in October. Hamilton has not lost since August 2012 and trains at Jackson's MMA in New Mexcio. Schoonover has finished all but one of his victories and has won three in a row. He has not fought since September 2012 so ring rust may play a factor. At age 33 Hamilton's time is limited to make it to a major promotion. I assume that if he defends his title he may be offered a shot. Hamilton by knockout, round 2.

There you have it. Who do you guys have?

How often do you watch AXS TV Fights?