Jon Jones and Alexander Gustafsson concluded UFC 165 with one of the best title fights in the history of Ultimate Fighting Championship (UFC) this past weekend (Sat., Sept. 21, 2013) in Toronto, Canada.

There have been some amazing title fights in the 20 years since Ultimate Fighting Championship (UFC) started: Anderson Silva vs. Chael Sonnen at UFC 117, Randy Couture vs. Tim Sylvia at UFC 68 and Frankie Edgar vs. Gray Maynard 2 at UFC 125 all spring to immediate mind.

Those are only some of the ones that went the distance; however, let's also remember the instant classics like Anderson Silva vs. Rich Franklin (either one), Matt Hughes vs. Frank Trigg, B.J. Penn vs. Diego Sanchez, Quinton Jackson vs. Chuck Liddell, the trilogy "Iceman" had with Couture and even Brock Lesnar's big comeback against Shane Carwin.

In other words, the list is long, deep and distinguished. And the mixed martial arts (MMA) match that Jon Jones and Alexander Gustafsson turned in this past weekend at UFC 165, which took place from Air Canada Centre in Toronto, Ontario, Canada, is right up there with the best ever.

In fact, it might even belong at the top.

The man that nearly no one gave a chance, Gustafsson, out-boxed and very nearly out-wrestled the best wrestler and the most dynamic striker in the Light Heavyweight division, Jones. Most betting sites had him at a +600 under dog. For those who don't follow betting, for every $100 you would have bet on "The Mauler," you would have won $600 back had he emerged victorious. On the flip side, Jones was a favorite by up to -1000 at one site (-850 was closer to average)! Again, that means if you put down $100 on Jones, you would walk up to the betting window and come away with $110.

UFC 165 main event was a great under dog story that makes for such compelling drama in sports when it happens, and man, did it ever. Gustafsson was so close to becoming Rocky Balboa, but Jones showed amazing determination in the latter rounds to snatch victory from the jaws of defeat (watch full fight video highlights here).

Many fans (who don't know what the word means) cried robbery on the decision victory (view FightMetric report here). That's such an egregious usage of the word that I hardly know where to begin, but I'll try and address it.

The first round was close. Here's what UFC's official website stats had to say about it: 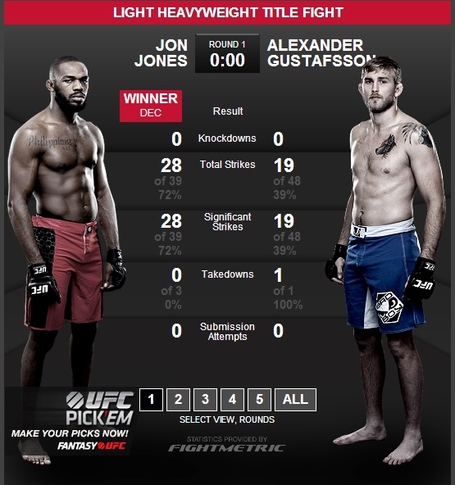 Huh? I had Gustafsson winning that round our LIVE UFC 165 play-by-play results thread. Most onlookers seemed to have it for him, too, but maybe there's an argument that Jones won that round? Bear in mind that I have doubts about Fight Metric's complete accuracy, but even if we allow for a fair +/- of a few strikes either way, Jones at least out-landed the Swede that round.

Most fight fans seemed to have the second round for "Bones," as did I, but again, the stat line is interesting: 26/42 significant (and total) strikes for Jones, 15/51 for Gustafsson. We'll call that a definitive Jones round.

The third seems to mostly sway to the corner of Gustafsson, and I agree there as well, despite AGAIN, Fight Metric's UFC stats stating that Jones out-landed Gustafsson. Now, this isn't Olympic boxing so we aren't just counting of totals here, but man, if it's that close, maybe it wasn't so clear?

Shrug, I'll still say that was Gustafsson's round for sure.

Round four is interesting because Jones was almost certainly losing that round up until the time he smashed Gustafsson's head open with that spinning back elbow with about 30 seconds left. That was about the closest anyone came to a finish, and we weren't far from one at all. Jones swarmed, and if he'd have kept punching instead of going for a takedown, he might have even stopped the fight.

The last round, virtually everyone scored for Jones, but surprisingly, Fight Metric says that Gustafsson actually out-landed Jones in total strikes and significant strikes were even! Still, that was a Jones round if there was one at all.

So how do you have it? I see two (two and five) clear rounds for Jones (some people have been arguing the second!) to one to Gustafsson (three) with two debatable rounds (one and four).

How can anything so close be called a "robbery"? Tossing words like that around detract from the greatness that was this title fight, and do it and both men a disservice in my opinion. Both fighters were tagged often from each other and ended up in the hospital (see their emergency room pic here).

This was a two-man war not seen since Mauricio Rua got obliterated by Dan Henderson in the first two rounds, but spent the last two taking down the decorated wrestler and mounting him repeatedly, while "Hendo" struggled to the finish line.

Here's hoping that the rematch (more details on that here) is anywhere near as good as the first fight. It will be a treat, even for the undeserving fans who would prefer to scream bloody murder over something they shouldn't be rather than appreciate the passion, heart and excellence, as well as the blood, sweat and tears shed by both combatants tonight.

Indeed, Jones and Gustafsson "felt like they were going to die" this past weekend. Let's bask in the great glow of an epic, close pugilistic encounter rather than debate over-exaggerated "robbery" nonsense.