Jon Jones may have earned the decision on the judges scorecards in his Light Heavyweight bout against Alexander Gustafsson at UFC 165 last night (Sept. 21, 2013) in Toronto, but does the Fight Metric report agree? Come see right here!

If you look at the record books, from now until the end of time, it will read that Jon Jones retained his Ultimate Fighting Championship (UFC) Light Heavyweight title by defeating Alexander Gustafsson by unanimous decision on judges scores of 48-47, 48-47, and 49-46 at the UFC 165: "Jones vs. Gustafsson" pay-per-view (PPV) event at Air Canada Centre in Toronto, Canada, on Sat., Sept. 21, 2013.

But, there are many who believe that not only should Gustastafsson had been declared the winner, but that the 49-46 card is absolutely bullshit (see it here).

That's because it certainly seemed that Gustafsson was doing everything he needed to do to win the fight in the first, third and fifth rounds (watch full video highlights here). But, how can we tell with the metrics we have on hand? Well, Fight Metric is about as good as it's going to get, so let's take a look at what the statistics say.

Remember to click here to check out the report in full and to get a detailed explanation on Fight Metric's methods. 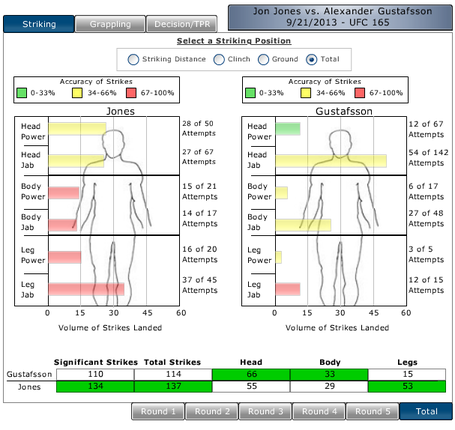 Next the grappling report: 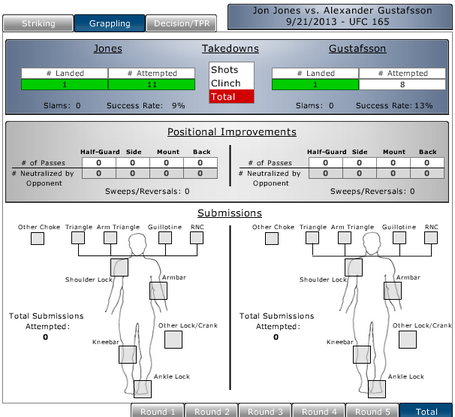 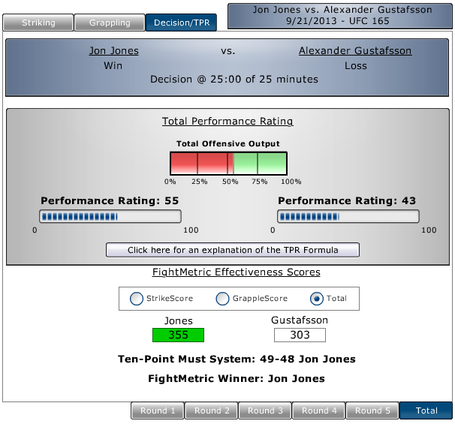 So the numbers don't lie. The judges scored the fight for the deserving winner, though it was an extremely close affair. Obviously these numbers don't take into account the damage, but they do tell the story of the bout.

Will this help you accept Jon Jones' victory? Or do you still feel that Alexander Gustafsson was robbed of his rightful victory? Tell us what you think in the comments, Maniacs!

For more on "Jones vs. Gustafsson" click here, and for complete UFC 165 results and blow-by-blow coverage of all the night's action click here.