The CompuBox stats are in and they clearly show that Floyd 'Money' Mayweather dominated Saul 'Canelo' Alvarez from pillar to post at the MGM Grand Garden Arena in Las Vegas, Nevada.

The bout between Floyd 'Money' Mayweather and Saul 'Canelo' Alvarez last night (Sept. 14, 2013) at the MGM Grand Garden Arena in Las Vegas, Nevada cemented Mayweather as the best boxer of our generation. From the opening bell, he took the fight to Alvarez, working his jab and fighting inside the pocket.

It was not the typical defensive performance that fans have come to expect from Mayweather. Instead, he decided to get off first, landing jabs and multiple punch combinations that left Alvarez flat footed.

CompuBox, boxing's number one statistics company, broke down the main event. No matter the breakdown, the numbers tell the story that Mayweather clearly won every single round except for the fourth, where Alvarez also connected on 14/38 punches.

This just supports the fact that the fight should have been a clear Unanimous Decision for Mayweather. 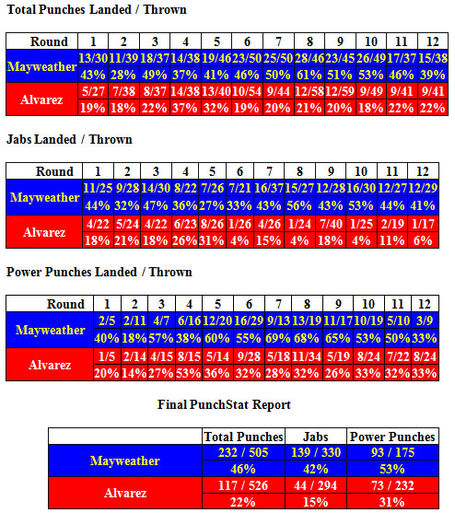 For complete "Mayweather vs. Canelo" results, including play-by-play of the entire televised main card, click here and here.

• How did one judge score fight a draw?

• Mayweather on Canelo: "He will carry the torch"

• After big bout, no follow up in sight for boxing