Floyd Mayweather Jr. put on an absolute clinic at MGM Grand Garden Arena in Las Vegas, Nevada, last night (Sat., Sept. 14, 2013) when he faced Saul "Canelo" Alvarez in a high-profile bout entitled "The One." It ended in miled controversy, however, as judge C.J. Ross somehow scored the bout a draw. Check out the scorecards below.

Last night (Sat., Sept. 14, 2013) at MGM Grand Garden Arena in Las Vegas, Nevada, Floyd Mayweather Jr. put on an absolute clinic against Saul "Canelo" Alvarez. The Showtime pay-per-view (PPV) main event was one of the best performances of Mayweather's illustrious career, one that saw him dominate Alvarez from pillar to post.

For complete "Mayweather Jr. vs. Canelo" results from the Showtime PPV, including play-by-play coverage of the main event and much more click here and here.

Most fight fans who were watching the 152-pound catchweight championship bout thought that it was a clear win for Mayweather. After all, he out struck the young Mexican fighter, and landed the more significant punches when they engaged.

So it came as a surprise when ringside announcer Jimmy Lennon Jr. announced that the fight was a majority decision (full fight recap here). The only way that could be possible was if one judge scored the bout a draw. That's exactly what happened as Judge C.J. Ross scored the fight 114-114.

This isn't the first time that Ross has been the center of controversy. When Manny Pacquiao fought Timothy Bradley, she scored the bout 115-113 for Bradley, which essentially handed "Pac Man" an incredulous loss.

There is no word yet from the Nevada State Athletic Commission (NSAC) if there will be an investigation, but from all that were watching the bout, it was a criminal scorecard.

Check out the pic below: 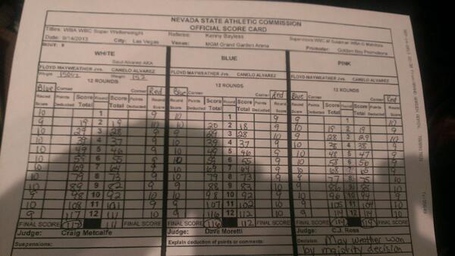