We're little more than 48 hours away from finding out who is "The One."

And one major player will be conspicuously absent.

Both champions were on hand earlier today to put the finishing touches on their pre-fight duties, as the final "Mayweather vs. Canelo" press conference unfolded at the KA Theatre from MGM Grand Garden Arena in Las Vegas, Nevada, which also plays host to Saturday night's fight.

See how it all went in our "Mayweather vs. Canelo" press conference video stream right here.

With Manny Pacquiao out of the "super fight" picture, Alvarez is the next best thing. The undefeated Mexican sensation recently unified the 154-pound belts and owns 30 knockouts in 42 wins. Whether or not those credentials indicate he'll be able to overcome the best defensive boxer on the planet remains to be seen.

The good news is, we won't have to wait much longer.

Naturally, we still have to get through tomorrow's official weigh in event from "Sin City," so you can expect another round of pics, videos and news updates (like these) for what is already trending to be the biggest boxing event of all time. Live results? Right here at MMAmania.com on fight night.

For more on the "Mayweather Jr. vs. Canelo" super PPV Showtime show be sure to check out our complete event archive right here. 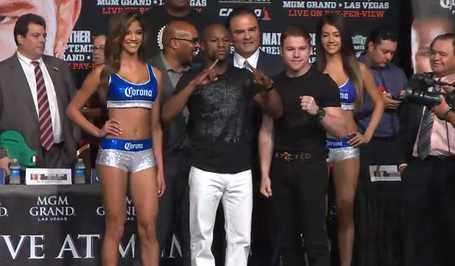