Check out the week that was at MMAmania.com! We've got interviews, comments, fanposts, videos and gifs!

Share All sharing options for: Best of the Best: MMAmania.com's UFC/MMA week in review (8/4/13)

Welcome, Maniacs, to the fifty-fifth edition of "This Week in MMAmania.com." MMAmania is a gigantic and glorious place and we pump out a ridiculous amount of content. If you don't refresh this site every 60 minutes, you might just miss something amazing.

Have no fears, that's what this weekly article is all about! We'll recap the best of all things MMAmania, whether it be a great comment, a Fan Post, an article, video or something else.

- Comment of the Week: Props to TFK, who had the best timing and response to our article about the Down's syndrome fighter vs cerebral palsy fighter bout being cancelled by the state of Florida.

I only read the headline and not the whole article...
...but I guess this means Rampage vs Tito is off?

- Article of the week: With all the new talent cropping up this past week, everyone was raising their game, so I'm going with a three-way tie of very solid articles you should be checking out. Let's start with Michael Stets' "Don't Cry for me, Lyoto Machida," about Machida turning down a title shot last year. Another nod goes to Matthew Roth for his debuting "What was Spike TV Thinking?" post concerning blurring the lines between pro wrestling and MMA, and I'll be a selfish prick and nominate my own editorial about Brian Stann turning in a star-making performance on UFC 163 commentary.

- Statistic of the Week: Believe it or not, Lyoto Machida actually gained some serious heat this week. Not only did he make waves by saying UFC pressued Anderson Silva into the Weidman rematch, perhaps most surprising of all was the fact that the highlights from his controversial decision loss to Phil Davis were actually viewed more than 1.5 times as the highlights from the freaking main event title fight between Jose Aldo and Chan Sung Jung!

- MMAmania's Verbal Submission Podcast: Okay, I may not have hosted a show on Wednesday (big news on this coming soon), but I still did my weekly Sunday episode and we had a really cool interview with forgotten Bellator tournament winner Daniel Straus (more from this interview coming to Mania later today)

Did you miss it? Don't worry, you can listen to the archived podcast by clicking on the player below:

- Photoshop of the Week: If I spot a good photoshop from you guys, it's going up here. This one from PabloXL exaggerating the differences in a potential Jon Jones vs Daniel Cormier staredown had me rolling: 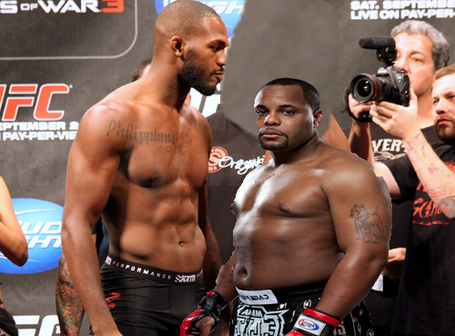 - Fanpost of the week: Shocker, Adrian MacNair's 163 Official Report Card post was thorough, well-written and once again extensive. This wasn't even a debate..

- Honorable mention fanpost of the Week: I really dug Cerrone's Sombrero's video footage of Johny Hendricks and GSP working out and squaring off in Cowboy Stadium. Such a cool visual.

- Honorable mention comment of the week #1: While Antonio "Bigfoot" Silva's acting career is an easy target and the winner for this honorable mention probably was going to go to whoever was online at the time and was able to write the joke in first, that doesn't make Ninja Oreo Dollop's comment any less funny.

I hope they cast his head as The Sphinx of Giza.
This roll screams Oscar.

- Honorable mention comment of the week #2: Joe Rogaine takes the cake for his absolutely perfect pun regarding Lyoto Machida's disgusting video where he exchanges urine to be drunk with a female reporter:

- Interview of the Week: Normally I'd nominate one of my own articles, but seriously how many times are we privy to an exclusive interview with Manny freaking Pacquiao? Even if you're not a boxing fan, Michael Stets' interview i's a worthy read.

But that's not all, I spoke with upcoming World Series of Fighting main carders Ray Sefo, Angel DeAnda and Tyson Griffin while Stets interviewed Tyrone Spong and jackjohnbrown spoke with Kevin Randleman and Dustin Poirier.

- Video of the Week: I hate to give some views to the competition, but Jack Slack did an extremely interesting analysis of rising featherweight star Connor McGregor's techniques. Check it out:

- Burn of the Week: This is more of a sarcastic burn on Quickjab which quickly turns into a nasty burn on the one and only Chael Sonnen.

where did Sonnen come from?

when a man loves a women

sometimes he sticks his penis into her vagina, then they have a baby. When that baby commits real estate fraud, and abuses steroids, then he is chael sonnen

Here's our honorary #MMAmania Tweet of the Week: Debuting Maniac Matthew Roth brought the house down with his humorous tweet about raising the stakes for Bellator's reality series Fight Master next year:

Next season of Fight Master takes place on Temptation Island and the fighters have to deal with baby mama drama and also hookers.

- Dumbest Comment of the Week: This one only gets brought out for special occasions when someone gets nominated but vhw-, you definitely deserved it this time around. Sure, Vitor and Hendo may use TRT, but they are clearly not has-beens or never-weres. That's actually pretty sad if you believe it.

great, two roided up past their prime never-been's mixing it up. this has ‘brazilian main-event' written all over it.

i've got belfort by virtue of doing more roids than henderson, though no one should win that fight
know what? this is a 5 rounder, i take henderson instead

- Obligatory TNA of the Week: I wish every female surfer used this warm-up routine

Scottidog's "Good guy comment of the week" - This one goes to ricky~dooby again for his contribution to the Mania money pool which he's been posting around the site in multiple comments. Seriously, this poster is incredible and will probably even get me off my ass to participate: 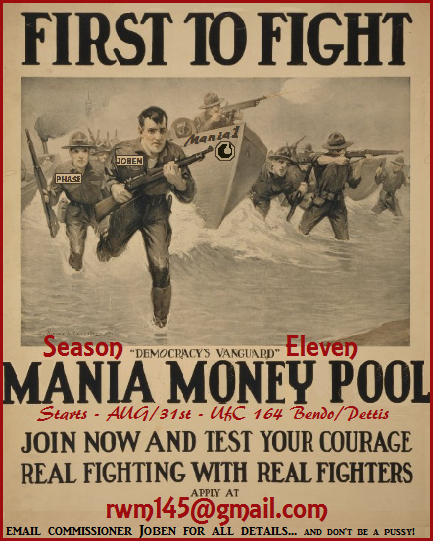 Lastly, let's finish off the week with some Maniac debate. This time, we're looking to the future.

Will Lyoto Machida ever get another title shot? If your answer is yes, what weight class?

That's it for this week. If you've got an extra suggestions for content, or nominations for articles, comments or discussion topics, please feel free to e-mail me at (and I made this e-mail especially for this): HemmingerMMA@gmail.com.