Phil Davis may have earned the decision on the judges scorecards in his light heavyweight bout against Lyoto Machida at UFC 163 last night (Aug. 3, 2013) in Brazil, but does the Fight Metric report agree? Come see right here!

If you look at the record books, from now until the end of time, it will read that Phil Davis defeated Lyoto Machida via unanimous decision on judges scores of 29-28 across the board at the UFC 163: "Aldo vs. Korean Zombie" pay-per-view (PPV) event at the HSBC Arena in Rio de Janeiro, Brazil, on Sat., Aug. 3, 2013.

But there are many who believe that very fact is absolute bullshit.

That's because it certainly seemed that Machida was doing everything he needed to do to win the fight. But how can we tell with the metrics we have on hand? Well, Fight Metric is about as good as it's going to get, so let's take a look at what the statistics say.

Remember to click here to check out the report in full and to get a detailed explanation on Fight Metric's methods. 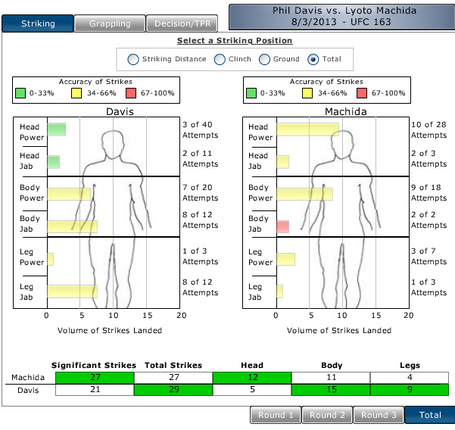 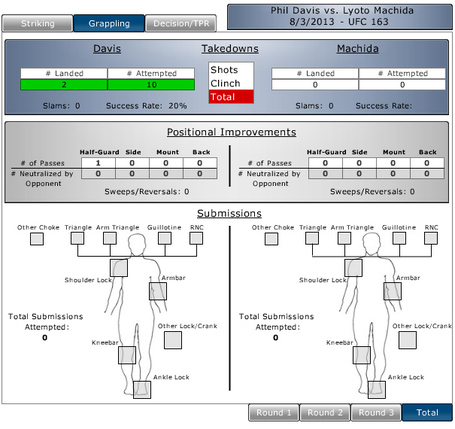 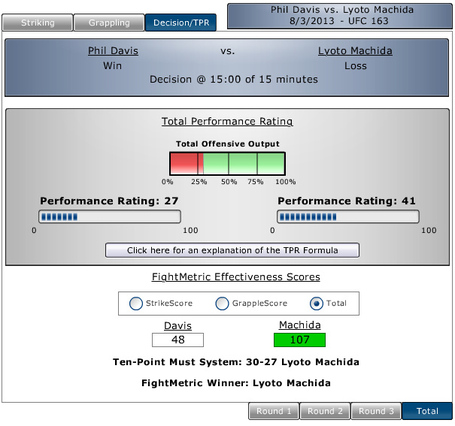 So, according to the numbers, Machida should have been awarded the decision 30-27. That's based simply on the numbers, of course, and not a ton of other factors that are supposed to be considered when scoring MMA bouts but this gives us another view of a highly disputed bout.

Does it change your mind on things, Maniacs?

For more on Davis's win over Machida click here, and for complete UFC 163 results and blow-by-blow coverage of all the night's action click here.