Find out how to get buff, without the stuff.

"When I lift, I'll do exercises designed to build strength and power, such as the bench press, squat, pullup or power clean. Closer to a fight, this would shift to more conditioning and speed-based movements. I try not to do stuff that's too isometric -- fighting is more dynamic, so you train that way. I'll do a good, active warmup, sometimes taking up to 20-25 minutes, then get into my lifts." 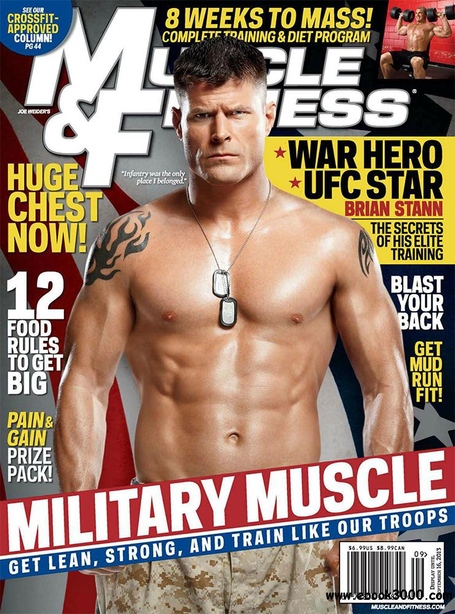 As part of the magazine's in-depth look at the "secrets" of Stann's "elite training," readers can also get familiar with the Army Fitness Playbook, featuring programs developed by the Army's Physical Readiness Division. And on the bright side, you won't have to get up at 5 a.m. with a bugle in your ear.

"You've got to have legitimate strength and conditioning training out there. But these guys were in pretty good shape. They were all strong. They weren't just guys who could run five or six miles. Marines need to be able to have their heart rate elevate to above 160 then bring it down to a normal level. In the field, guys would sprint, then shoot or rig an explosive to blow a door and sprint back to cover. When you're in a firefight, it's a fight to this corner, then a fight to that corner. Then you jump on a vehicle. All this equipment and ammo is heavy. So the Corps is very serious about physical fitness. On a normal day at work, you're going to have one to two hours dedicated solely to that."

In addition to his military exploits, Stann (12-6) served as an MMA analyst for FUEL TV, which undoubtedly prepared him for his new gig inside the FOX Sports South college football broadcast booth (details). Alongside Wes Durham and Jenn Hildreth, the former Midshipman is tasked with covering the Atlantic Coast Conference (ACC).

Hear more from the "All American" on MMA, training and military combat in the Sept. 2013 issue of Muscle & Fitness, on newsstands now.