Now that the dust has settled and the smoke has cleared in the wake of UFC Fight Night 26, the SB Nation crew has tallied the votes and come up with the 10 best light heavyweight fighters in mixed martial arts (MMA) today. Have a look.

Looks like the "Bad Guy" is officially a top 10 light heavyweight.

Rua's light heavyweight career in the UFC cage has been a bit of a disappointment and with this loss, he's almost been removed from the top 10 of the division entirely.

As a result, the SB Nation -- comprised of MMAMania, MMAFighting, and Bloody Elbow -- had to reshuffle its list of the top 205 pound fighters in the UFC and beyond.

See how this list compares to the UFC's official rankings here. 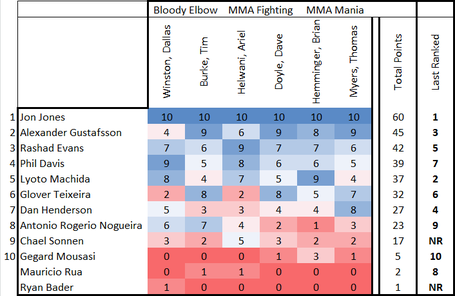 Expect to see more movement in the top 10 in the upcoming days. With the UFC Fight Night 28 headlined by a light heavyweight bout between Glover Teixeira and Ryan Bader, it's possible that a Teixeira win would see him enter the top 5 of the division.

And then midway through September at UFC 165, Jon Jones and Alexander Gustafsson meet for the UFC's light heavyweight title.

You've seen our list, Maniacs, now lets hear it from you...