Lunch with Tim Kennedy and Andrew Craig: the final meal before fight camp

Share All sharing options for: Lunch with Tim Kennedy and Andrew Craig: the final meal before fight camp

On Thursday (August 22, 2013) I received a tweet from Ultimate Fighting Championship (UFC) middleweight Tim Kennedy. The message was short and to the point: if there's anywhere I want to eat, it was my one week warning. Fight camp starts next week.

Seeing as we're both Austin, Texas residents and barbecue fanatics, the choice was simple. We'd be having lunch at Franklin's BBQ, home to arguably the best place for 'cue in the country. There was just one catch: I'd have to wait in line since he had a morning strength and conditioning session with fellow UFC middleweight Andrew Craig that was going until 11:30 a.m. 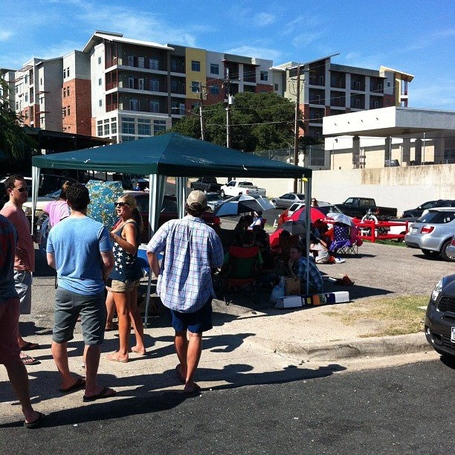 The Franklin's faithful begin to line up at 9:00 a.m. every day, two hours before the doors finally open. Get there too late, and you're out of luck and going home hungry. They don't have a set closing time, just whenever the food runs out.

I almost made the mistake of showing up too late. I got there at 10:40 a.m. on Friday (August 23, 2013) and the parking lot looked like a tailgate for a University of Texas football game. College bros were shot gunning beers in the 100+ degree Texas heat, only finding solace in their tents they had set up.

The staff at Franklin's called the line immediately afterwards. After me, there was no guarantee that anyone would actually get some food. That left a lot of Texans angry. I just hoped there'd be food for two UFC fighters who had just come from an intense training session. 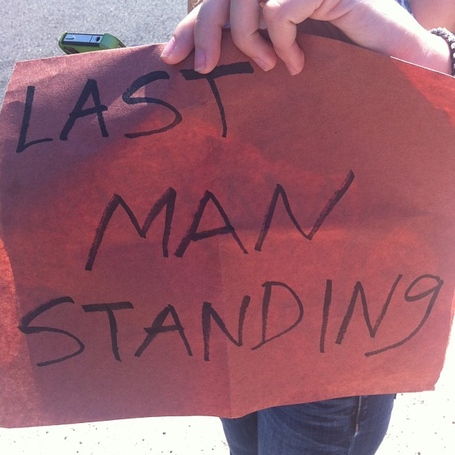 This wasn't the first time I've had lunch with Tim, but it was the first time I got to spend an extensive period of time with him. Usually it's just a few quick tacos before he's back to his normal training schedule. This would be the first time that the only thing Tim had scheduled was a run and an ice bath for recovery.

But that's not to say that he had a free day either. The life of a main event UFC fighter never stops. He still had interviews with media outlets scheduled and needed to make some fight camp preparations for his bout with Machida.

When they showed up, I made the mistake of asking if Andrew was excited for be fighting on the "Bisping card" in Machester, England. Tim quickly stopped me and ask with a smile, that we call it either the "Munoz card" or the "not Michael Bisping card." The rivalry between Bisping and Ranger Up is still alive and well.

Almost immediately, Tim was on his phone, checking his twitter. Apparently former UFC light heavyweight champion, Tito Ortiz, had mentioned Tim in a tweet about UFC fighter pay. Ever since speaking about fighter pay, Tim has been attempting to avoid the topic. Ortiz' tweets were a headache he didn't want to deal with before lunch.

A mother, there with her three sons, recognized Tim. She told us that her husband was a die-hard MMA fan and was currently an active member of the United States Navy. Her two youngest sons had started training Brazilian Jiu Jitsu on the base and she wanted to know if it would be okay for them to get a photo with him.

Tim was happy to oblige, including a photo putting one in a loose rear naked choke. I heard those kids talking about it with their mom the whole time we waited in line. Totally made their day.

Though Andrew has more fights in the UFC's octagon, Tim is viewed as the veteran, both literally and figuratively. Kennedy is fighting in Lyoto Machida in the main event of Fight for the Troops 3, while Craig finds himself fighting Luke Barnatt at UFC Fight Night: Bisping vs Munoz.

He's still working to make a name for himself, despite impressive outings against Rafael Natal and Chris Leben. But he's also one of the most down to earth fighters. With the UFC, he's had the opportunity to fight in Australia, Brazil, and now England. It's been a great experience for a guy who came up fighting in Houston, Texas.

Since the announcement that he would be fighting Machida, people have been talking about how the UFC is still punishing Kennedy for his fighter pay comments. Tim laughed when I pointed that out, telling me that a punishment wouldn't include fighting in front of active servicemen in the main event of the night.

It's a huge fight for him. Not only is this his first opportunity fighting as the main event in the UFC, but he'll likely be the focus of the build up, as a Special Forces veteran.

Though he's elated he has a bout lined up, he was a bit disappointed that he's had to put some things on hold. Tim had a night vision hunting trip in South Texas planned for Friday night, but had to cancel it because he needs to be in the gym every morning.

Craig has a similar story. He likes to spend the Texas summers wake boarding on the lake, but when he got the call for the Barnatt fight, he instead had to start training multiple times a day to get ready, either in Houston or in Austin.

It's the small things that they have to give up for their chosen profession.

One thing that they both told me is that they really don't ever want to talk about fighter pay. While fans and media love to wonder if fighters are happy with their contracts, the general feeling among them is that talking about it doesn't benefit them in any way. Same with speaking on the record about PED usage in MMA. It's just one of those topics that's better left out of the conversation 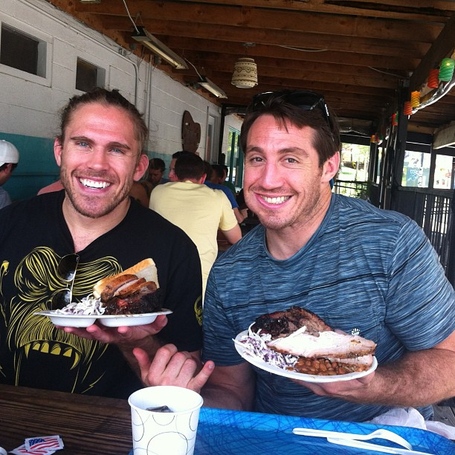 We finally got to the front of the line and all three of us got our plates of BBQ around 1:45 p.m., three hours after I first arrived that day. We continued talking about MMA at lunch, notably about the UFC's promotion of Connor McGregor and his tweets regarding the top 10 featherweights.

Both found it amusing that McGregor said that the best wrestlers in the division were either "old" or "135ers", a clear indication that those are what he considers to be the nightmare match ups.

Tim also went on a bit of a rant about Warner Brothers' choice for Ben Affleck as the new Batman. He's a comic book reader and said, "are you kidding me? Did you NOT see Daredevil?!" One beloved superhero is enough.

He switched gears and started talking about how Hollywood tends to do that a lot, notably with Tom Cruise somehow becoming an action star, despite his 5'6" build. Seriously, the rant went on for four minutes. When he's given a chance to relax around friends, Tim is one of the funniest fighters I've met in MMA.