Ultimate Fighting Championship (UFC) has released its full poster for UFC Fight Night 29 featuring the main event showdown of Demian Maia and Jake Shields. It all goes down on Oct. 9, 2013 from the Ginásio José Corrêa in Barueri.

Share All sharing options for: UFC Fight Night 29 full poster for 'Maia vs Shields' on Oct. 9 in Barueri, Brazil

It's the grapplers' time to shine

Ultimate Fighting Championship (UFC) makes its sixth trip to Brazil this year with a  Welterweight match pitting Demian Maia and Jake Shields opposite one another. The card will be the promotion's fourth for Fox Sports 1.

In the UFC Fight Night 29 main event, which tops off a great card on free television from the Ginásio José Corrêa in Barueri, Brazil.

Both Maia and Shields have had success since dropping down to the welterweight division. Maia has gone 3-0 since making the cut and is currently ranked #4 on the official UFC media rankings while Shields was able to score a decision victory over top prospect Tyron Woodley this pat June in his first fight since returning to 170 pounds. 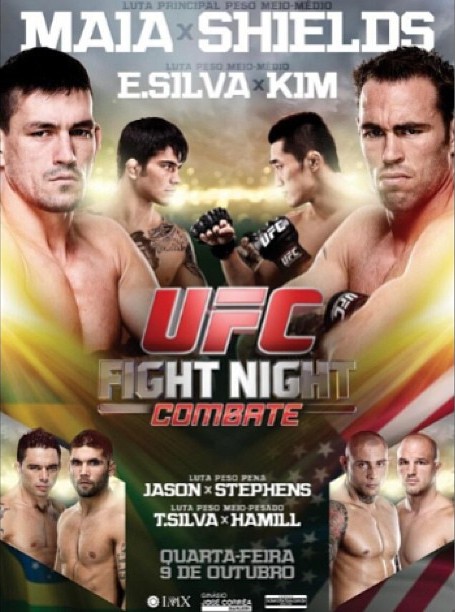