Check out the numbers behind the split decision victory John Howard scored over Uriah Hall at UFC Fight Night 26 tonight (Aug. 17, 2013) in Boston, according to Fight Metric.

John Howard made a successful return to the Octagon tonight (Sat., Aug. 17, 2013) on the biggest stage possible on the main card of the UFC Fight Night 26: "Shogun vs. Sonnen" event at the TD Garden in Boston, Massachusetts, that was kick starting the new Fox Sports 1 channel.

He did so by defeating Uriah Hall via split decision.

But, of course, if we've got a split decision on our hands, it means we've got potential controversy on our hands. The only tool we have to help settle these arguments is the Fight Metric report.

So let's take a gander at the goods, shall we? 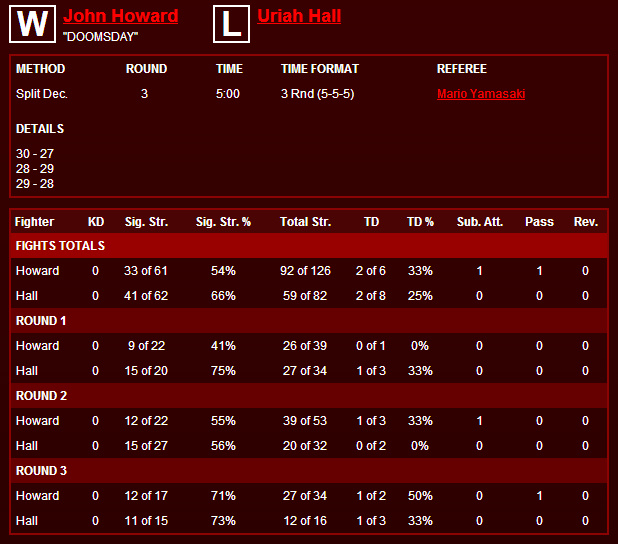 Howard started slow but came on strong late while Hall was up and down throughout the fight. It's important to note the numbers don't account for the always controversial "Octagon control" scoring metric.

Still, it seems the judges made the right call here. Would you agree, Maniacs?

For more on Howard's win over Hall click here, and for complete UFC Fight Night 26 results and blow-by-blow coverage of all the night's action click here.