Check out the week that was at MMAmania.com! We've got interviews, comments, fanposts, videos and gifs!

Share All sharing options for: Best of the Best: MMAmania.com's UFC/MMA week in review (8/11/13)

Welcome, Maniacs, to the fifty-sixth edition of "This Week in MMAmania.com." MMAmania is a gigantic and glorious place and we pump out a ridiculous amount of content. If you don't refresh this site every 60 minutes, you might just miss something amazing.

Have no fears, that's what this weekly article is all about! We'll recap the best of all things MMAmania, whether it be a great comment, a Fan Post, an article, video or something else.

- Comment of the Week: Plainview was at it again with his killer response to a query from dudebro911 concerning Conor McGregor's wrestling ability.

Do we even know if the dude can wrastle?
Do they wrestle in ireland?

They wrestle with alcohol addiction.

- Article of the week: Great work this week from Andrew Richardson for his very thorough breakdown of the one and only Chael Sonnen as he preps for this Saturday night's main event opposite Mauricio Rua in the UFC's debut on Fox Sports 1..

- Statistic of the Week: It's crazy to think that in a week where UFC makes its debut on Fox Sports 1, Chael Sonnen is saying all sorts of outlandish things and Eddie Alvarez settles with Bellator, the biggest story by a landslide was a fighter who's not even in the UFC anymore. Mayhem Miller crushed everyone by a landslide. Our initial story on the former Bully Beatdown host's arrest was five times as popular as anything else this week.

- MMAmania's Verbal Submission Podcast: Yes, folks, we're actually back. The Verbal Submission podcast returned this week with a special two hour edition co-hosted (for the foreseeable future) with Matt Roth. We also had an interview with Felice Herrig (at the end).

Did you miss it? Don't worry, you can listen to the archived podcast by clicking on the player below:

- Photoshop of the Week: Plainview pulls double duty by bringing home this hilarious photoshop of Lew Polley after he missed the light heavyweight limit by the measly sum of 32 pounds. : 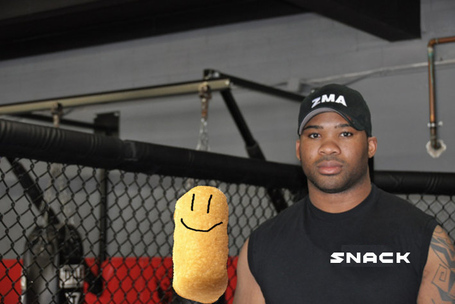 - Fanpost of the week: Shocker, unambig's UFC Fight Night 26 "Quick and the Dirty" was very well-written and once again extensive. This wasn't even a debate..

- Honorable mention fanpost of the Week: Breaking Bad is back this week, so check out the post-show discussion thread talking all the latest awesomeness. .

- Honorable mention comment of the week: Lew Polley brought these jokes on himself when he missed weight for WSOF 4 by 32 pounds, but BlueHaze's was the original awesome joke that started them all. .

- Interview of the Week: Michael Stets had a terrific in-depth interview with Bellator CEO Bjorn Rebney covering a wide range of topics including a hint that the promotion was about to disband it's women's MMA divisions.

But that's not all, I spoke with Bellator season six featherweight tournament winner Daniel Straus discussing his drug arrest this past March and also his plans for the future. James Goyder also spoke with One FC's Andrew Leone about his upcoming fight.

- Video of the Week: See if the hype on Conor McGregor is real for yourself. UFC reposted his first fight with the promotion against Marcus Brimage for free:

- Burn of the Week: Every burn of the week nominee this week contributed my favorite "So fat" jokes to the Lew Polley post.

Lew Polly is so fat
He puts his belt on with a boomerang.

Lew Polley is so fat
When he was diagnosed with a flesh-eating disease, the doctor gave her ten years to live.

Lew Polley is so fat
that whenever he steps into a cage, he turns it into the YAMMA pit.

Here's our honorary #MMAmania Tweet of the Week: Matthew Roth takes it home for his second consecutive week with his tweet about what Randy Couture should save in his first episode of Gym Rescue:

Episode One of Spike's Gym Rescue is Randy Couture attempting to save the ratings for Fight Master. Truly cross promotional!

- Obligatory TNA of the Week: Those hips certainly don't lie.

btw great job on the recruitment poster Doobs! So happy to be a part of the toughest camp in PG

Lastly, let's finish off the week with some Maniac debate. This time, we're looking to the future.

What fight are you most looking forward to the rest of the year?

That's it for this week. If you've got an extra suggestions for content, or nominations for articles, comments or discussion topics, please feel free to e-mail me at (and I made this e-mail especially for this): HemmingerMMA@gmail.com.