This calendar year has seen a shocking amount of mixed martial arts (MMA) upsets from fighters who many thought would stomp their opponents. Hubris, however, would prove otherwise. Whose arrogance will send them tumbling next?

If you're a mixed martial arts (MMA) fan who dislikes arrogance, hubris, cockiness and showboating, then 2013 has been quite the banner year. Between Muhammed Lawal, Alistair Overeem and last night (July 6, 2013) Anderson Silva at UFC 162, when will fighters learn that showboating is bad for their health?

And those weren't even the only guys! Let's not forget Rashad Evans' absurd three rounds of patty-cake with Antonio Rogerio Noguiera, Jon Fitch overlooking Josh Burkman and Uriah Hall (the next Anderson Silva, y'all) falling to Kevin Gastelum.

Or just knocks him clean out.

Who the hell knows what Silva was doing versus Weidman at MGM Grand Garden Arena in Las Vegas, Nevada, several hours ago; however, he basically went full Robert Downey Jr. against someone who has striking that isn't on the level of Stephan Bonnar or Demian Maia.

Basically, Renzo Gracie called it not too long ago when he reminded everyone that Silva is pretty disrespectful in the cage to his opponents.

"Anderson is a guy that rubs many people the wrong way. He's not a humble guy. Even though he may speak humbly when he talks, when he's in the ring he doesn't act humble. He puts down his opponents. He acts in a way that again, we always know what is right and wrong, and by looking at that, we know it's wrong. It's like you can beat your opponent, but do it with respect."

Indeed, too much clowning and not enough respecting.

It's eerily reminiscent of what "Bigfoot" Antonio Silva did to "Dead Man Down" Overeem at UFC 156 earlier this year. Or what Emanuel Newton did to "King Mo" when he cradled him gently in his arms afterward a few weeks later. 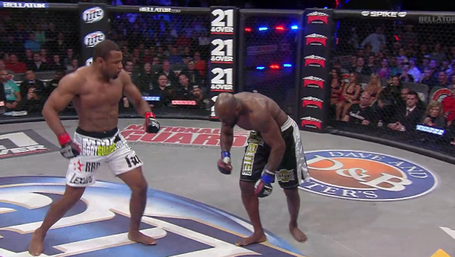 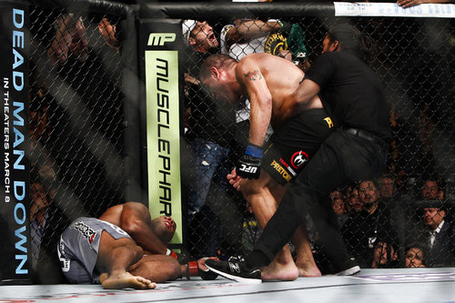 Hubris, my friends. It is the ruin of many a man great or small. And it ruined the run of one of the greatest in the history of the sport at UFC 162 in Las Vegas, Nevada, on July 6, 2013.

Not the first, and if history is an indicator, certainly not the last.

For more news and notes on UFC 162: "Silva vs. Weidman" be sure to hit up our complete event archive here. And for the latest and greatest on went went down between Chris Weidman vs. Anderson Silva last night click here.