Ultimate Fighting Championship (UFC) has released its full poster for UFC 165 featuring the main event showdown of Jon Jones vs. Alexander Gustafsson. It all goes down on Sept. 21, 2013 from the Air Canada Centre in Toronto, Ontario, Canada.

Share All sharing options for: Pic: UFC 165 full poster for ‘Jones vs. Gustafsson' on Sept. 21 in Toronto

The countdown has begun...and "greatness is within reach".

In their first post-summer pay-per-view (PPV) event of 2013, the Ultimate Fighting Championship (UFC) will head north of the border to Canada for the second time this year with a major light heavyweight championship fight in the main event as Jon Jones will return from a gruesome toe injury suffered in his last fight to face the pride of Sweden, Alexander Gustafsson.

That's just over two months away, and begins a run of (barring any injuries) four-straight PPV events headlined by major championship fights to close out the year.

The main event is significant for the future of the 205-pound weight class as Jones will attempt to earn his sixth title defence, which would break the record set by Hall of Fame inductee Tito Ortiz all the way back in 2002.

Gustafsson will hope to prevent that from happening by making some history of his own and becoming the first European born fighter to ever hold a UFC belt.

For more news and notes on UFC 165: "Jones vs. Gustafsson," visit our complete event archive here. 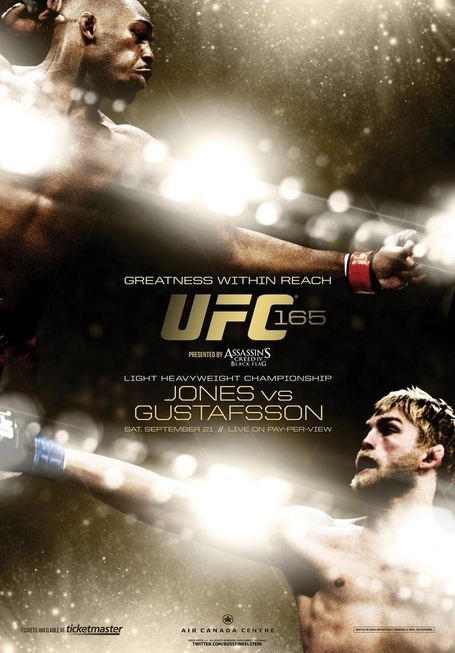