Antonio Rodrigo Nogueira and Fabricio Werdum came nose-to-nose at the UFC on FUEL TV 10 media day this afternoon (June 6, 2013), which took place in Fortaleza, Ceara, Brazil prior to their heavyweight rematch this weekend. See their staredown pic right here and much more.

UFC on FUEL TV 10: "Nogueira vs. Werdum 2" media day went down today (June 6, 2013) in Brazil and fighters from the top three bouts on the card were in attendance to answer questions from the media and face off for a photo-op.

The event is headlined by a heavyweight rematch between longtime mixed martial arts (MMA) veterans Antonio Rodrigo Nogueira and Fabricio Werdum, who will finally fight after spending months as opposing coaches on The Ultimate Fighter (TUF): Brazil 2.

The five-round heavyweight main event will be a rematch from 2006 PRIDE bout which Nogueira won handily by unanimous decision. "Minotauro" was the much more experience MMA fighter at the time, but Werdum insists he has caught up to and even surpassed the former interim UFC champion in terms of skills since the first meeting.

Supporting the main is the welterweight finals from TUF: Brazil 2 as William Macario battles Leonardo Santos for the six-figure UFC contract while light heavyweight sluggers Thiago Silva and Rafael Cavalcante are scheduled to exchange fisticuffs.

Here's a look at their staredowns: 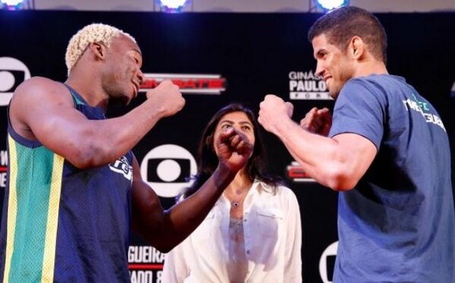 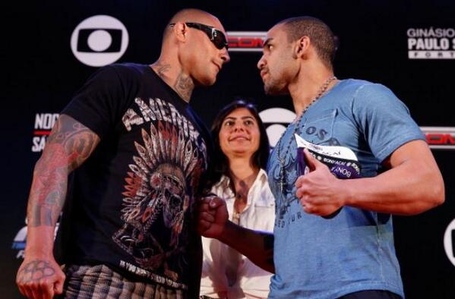 MMAmania.com will provide LIVE round-by-round, blow-by-blow coverage of the entire card on Saturday (June 8, 2013), starting with the Facebook "Prelims," which are scheduled to begin at 4:30 p.m. ET, as well as the main card, which is slated to air at 8 p.m. ET on FUEL TV.

For more news and notes on UFC on FUEL TV 10, visit our complete event archive here.