Pic: World Series of Fighting (WSOF) 4 full poster for ‘Spong vs. DeAnda' on Aug. 10 in Ontario

World Series of Fighting (WSOF) has released its full poster for WSOF 4 featuring Tyrone Spong vs. Angel DeAnda, Marlon Moraes vs. Brandon Hempleman, Ray Sefo vs. Dave Huckaba and Gesias Cavalcante vs. Tyson Griffin. It all goes down on Aug. 10, 2013, from the Citizens Bank Arena in Ontario, California.

Share All sharing options for: Pic: World Series of Fighting (WSOF) 4 full poster for ‘Spong vs. DeAnda' on Aug. 10 in Ontario

World Series of Fighting (WSOF), the budding mixed martial arts (MMA) promotion headed by kickboxing legend Ray Sefo, is gearing up for its fourth event on NBC Sports Network as "Spong vs. DeAnda" goes down on Aug. 10, 2013 in Ontario, California.

Check out the latest version of the fight card here.

Leading the charge is a light heavyweight contest between kickboxing sensation turned mixed martial arts (MMA) fighter Tyrone Spong as he takes on Angel DeAnda in a fight that was originally supposed to take place at WSOF 3 in June.

The co-man event will see Marlon Moraes, one of the top bantamweight prospects in the world, take on the rising Brandon Hempleman, who has won nine of his 10 professional fights.

Rounding out the top of the card is a lightweight bout of Gesias Cavalcante vs. Tyson Griffin and in an unprecedented move, Sefo will compete on the very card he's promoting against Dave Huckaba.

It's shaping up to be another solid show for the growing promotion. For more news and notes on the event, click here. 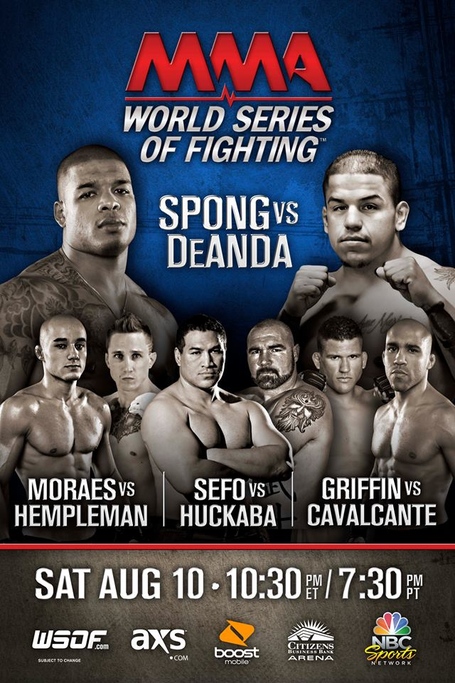