You can't get these new Round 5 collectibles anywhere except this year's UFC Fan Expo in Las Vegas. Get on line early!

Mixed martial arts (MMA) fans who are familiar with the Ultimate Fighting Championship (UFC) Fan Expo will tell you there are a few things you can count on every year when the world's largest combat sports promotion takes over the Mandalay Bay Convention Center in Las Vegas, Nevada.

Long lines, multiple seminars and kick-ass collectibles from Round 5.

This year will be no different, as Round 5 will set up shop in booth #7101 (look for WalkoutWear) at UFC Fan Expo 2013, held on July 5-6 in conjunction with the upcoming UFC 162: "Silva vs. Weidman" pay-per-view (PPV) event, featuring Anderson Silva in the headlining bout opposite Chris Weidman.

But don't wait for Saturday night (July 6) to get your fill of the middleweight champ.

Round 5 is bringing "The Spider" to this year's Fan Expo, which means if you want to get your hands on the Brazilian kingpin, you'll need to get on line early, because it's guaranteed to sell out prior to fight night. In fact, a handful of sneaky collectors have already started selling them on Ebay.

Well, Round 5 figurines are the only UFC collectibles that increase in value. In fact, previous fan expo exclusives appraise for at least $150, all the way up to $300. Not too shabby, considering the entire set of can be purchased for $160. Heck, even a mint Kenny Florian exclusive is valued at over $400 by Beckett.com and "KenFlo" never held a world title.

Imagine what you might get for this PRIDE edition Silva! 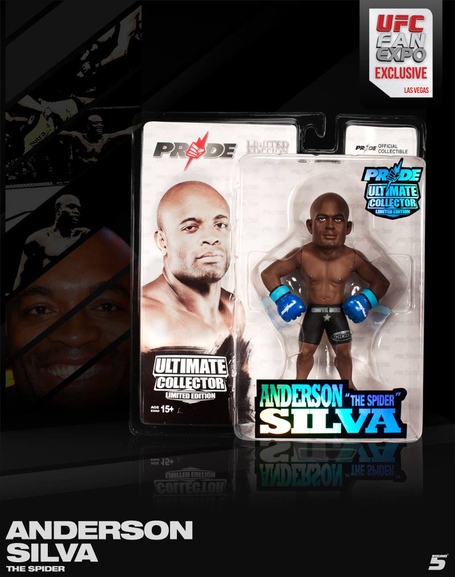 Unless they turn up in someone's collection on Facebook. 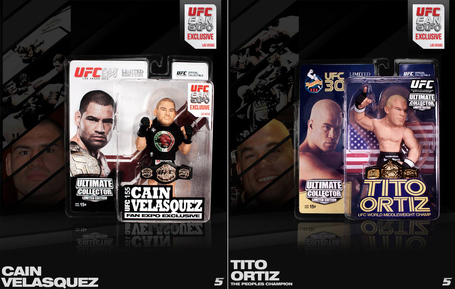 The official Round 5 Facebook page (see it here) is one of the best places to showcase your collection, or to simply brag that you were able to scoop up a handful of Fan Expo exclusives. In addition, you can get the jump on breaking news and exclusives -- including the latest UFC fighters to be immortalized by Round 5 -- through its official Twitter account right here.

Well, what are you waiting for?

To get more information on this year's UFC Fan Expo click here. To see all the latest and greatest Round 5 figurines and collectibles click here. Be sure to let us know in the comments section which fighters you have in your collection, as well as which combatants you're still planning to get.