Ultimate Fighting Championship (UFC) has released its full poster for UFC 164 featuring Benson Henderson vs. T.J. Grant and Frank Mir vs. Josh Barnett. It all goes down on Aug. 31, 2013 from the Bradley Centre in Milwaukee, Wisconsin.

Share All sharing options for: Pic: UFC 164 full poster for ‘Henderson vs. Grant' on Aug. 31 in Milwaukee

The countdown has begun...

After years of waiting, the Ultimate Fighting Championship (UFC) will finally make its first trip to Milwaukee to close out their busy schedule for the "Harley Davidson Hometown Throwdown," headlined by a lightweight championship contest between titleholder Benson Henderson and No. 1 contender T.J. Grant.

That's just over two months away!

In the co-main event, former UFC heavyweight champion Frank Mir will welcome another former UFC champion Josh Barnett back to the world's premier mixed martial arts (MMA) organization after over ten years in what is a match up between two of the most accomplished heavyweight ground fighters in MMA history.

For more news and notes on UFC 164: "Henderson vs. Grant," click here. 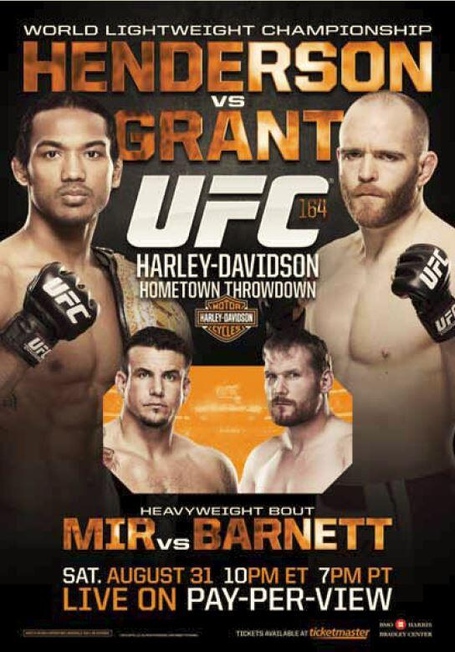