For complete WSOF 3 weigh in results, as well as a video replay of the scale-tipping action, click here.

The two men who are set to headline the upstart mixed martial arts (MMA) promotion's latest show, Jon Fitch and Josh Burkman, both hit their respective Welterweight marks without incident. Burkman is out for revenge against the former No. 1-ranked 170-pound Ultimate Fighting Championship (UFC) title challenger, tapping to a rear-naked choke submission at UFC Fight Night 4 way back in April 2006.

In addition to Jon Fitch vs. Josh Burkman in the WSOF 3 main event, the Friday night fight card will feature former Strikeforce prospect Lyle Beerbohm against another UFC veteran, Jacob Volkmann, in a Lightweight showdown (see pic below). Rounding out the televised main card is a 170-pound scrap between Steve Carl vs. Tyson Steele and a 155-pound tilt between Brian Cobb vs. Justin Gaethje.

MMAmania.com will provide LIVE round-by-round, blow-by-blow coverage of the entire WSOF 3 fight card on fight night (June 14, 2013), starting with the online "Prelims," which are scheduled to begin at 8:30 p.m. ET, right on through the NBC Sports-televised main card action, which is slated to begin at 11 p.m. ET. 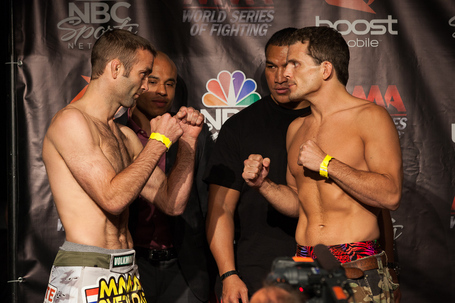