With UFC 161 on the horizon, the promotion today (June 13, 2013) trotted out its top stars for this weekend's pay-per-view (PPV) extravaganza in Winnipeg. Check out staredown pics for Rashad Evans vs. Dan Henderson, as well as Roy Nelson vs. Stipe Miocic.

"Evans vs. Henderson" will feature former UFC Light Heavyweight Champion Rashad Evans taking on ex-PRIDE FC titleholder Dan Henderson in the main event of the evening. At stake is a possible 205-pound title shot in late 2013, depending on how quickly division kingpin Jon Jones returns to action after his toe injury.

"Suga" and "Hendo" face off for the cameras (via Esther Lin for MMA Fighting): 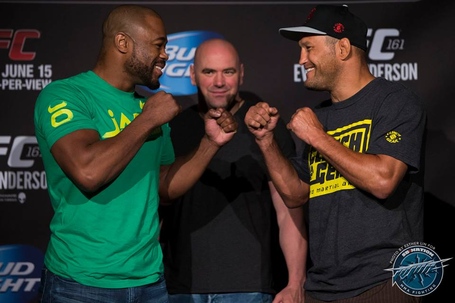 Also coming nose-to-nose were heavyweight co-headliners Roy Nelson and Stipe Miocic. "Big Country" is hoping to go out with a bang, since UFC 161 marks the final fight on his current ZUFFA contract. Miocic, meanwhile, would love to use "Big Country" as a stepping stone into the proverbial "mix."

Here's a look at their staredown (via Esther Lin for MMA Fighting): 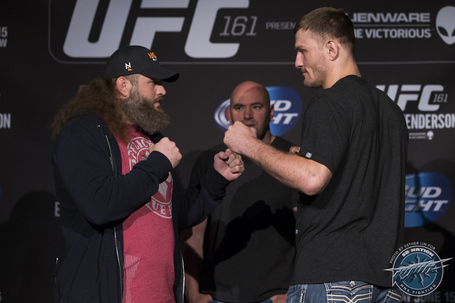 And let's throw in Alexis Davis vs. Rosi Sexton just for good measure (via Esther Lin for MMA Fighting): 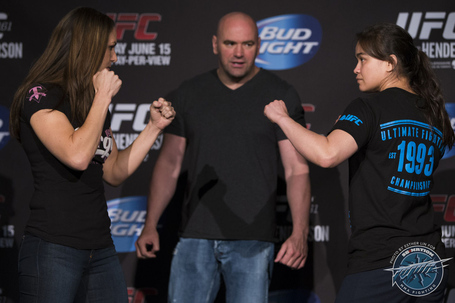 Should be a wild night of fights.

Remember: MMAmania.com will provide LIVE round-by-round, blow-by-blow coverage of the entire UFC 161 fight card on fight night (June 15, 2013), starting with the Facebook "Prelims," which are scheduled to begin at 7 p.m. ET, right on through the FX-televised under card bouts at 8 p.m. ET and then main card PPV action, which is slated to begin at 10 p.m. ET.

For the latest UFC 161 news and notes check out our complete event archive right here. To check out the latest "Evans vs. Henderson" fight card and rumors click here.