Sponsored by Tune Talk, the Malaysian Invasion Mixed Martial Arts (MIMMA) amateur tournament goes down on June 15, 2013 in Kuala Lumpur and features three fights put together by ONE FC, including Peter Davis vs. Ariel Sexton.

Share All sharing options for: Malaysian Invasion Final to Feature Three ONE FC Fights Including Peter Davis vs Ariel Sexton

The Malaysian Invasion MMA amateur tournament was launched earlier this year by mobile phone operator Tune Talk and a field of over 300 entrants has been narrowed down to just 14 fighters. They will meet in the finals on a June 15 card in Kuala Lumpur which also has three fights put together by ONE FC.

Tune Talk has been a major sponsor of ONE FC and as well as the seven finals of the MIMMA tournament, which are taking place under amateur rules, there will be three professional bouts featuring fighters contracted to Asia's biggest MMA promotion.

In the main event rising Malaysian star Peter Davis (6-1) faces the biggest test of his career to date when he takes on TUF veteran and Brazilian jiu-jitsu black belt Ariel Sexton (7-2-1). The Costa Rican was featured on TUF 12 and has been brought in to test Davis's credentials as he moves closer to a potential shot at the ONE FC 155-pound belt.

The co main event sees another Malaysian, Saiful Merican, look for his first professional win when he takes on India's Aditya Deshpande (3-0). Merican was beaten by Gianni Subba on his ONE FC debut but is a former Muay Thai champion who will be looking to use his striking to full effect against the unbeaten Full Contact Championshio fighter.

Filipino Edward Kelly, whose brother Eric challenged for the ONE FC 145-pound title earlier this year, will also be in action in a featherweight fight. Kelly (1-0) is going up against Thailand's Tanaphong Khunhankaew (2-2) in a bout which pits Wushu against Muay Thai and promises to be a stand up war.

Although these fights have been arranged by ONE FC the card is taking place under the banner of Malaysian Invasion Mixed Martial Arts (MIMMA) and before the three professional bouts the country's first ever national amateur MMA champions will be crowned.

The show is taking place at Stadium Negara in Kuala Lumpur, the same venue which hosted ONE FC: "Battle of Heroes" and will be broadcast by Star Sports. The full fight card is below and for more information about MIMMA click here. 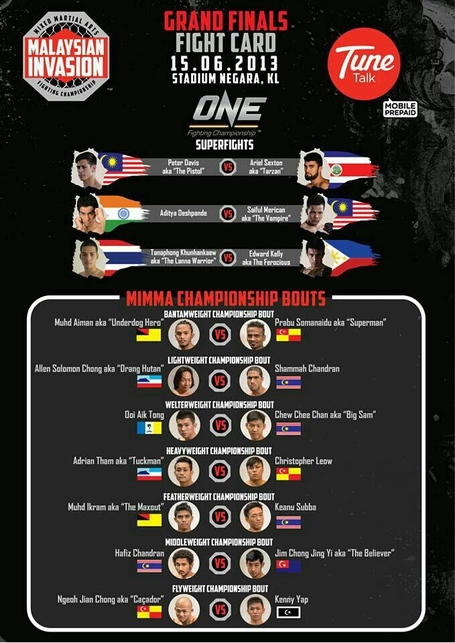